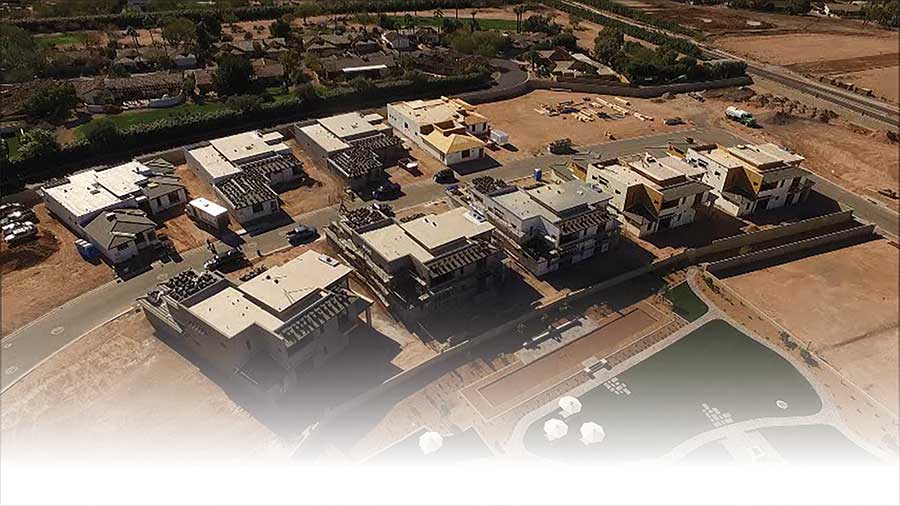 Instead of building individual custom homes, a few innovative ICF installers are building entire neighborhoods out of ICF, from footer to gable. From Texas to Canada, developers report that the homes sell quickly, and at a premium price.

ICF developments have long been considered the “Holy Grail” of residential ICF projects. For the contractor and distributor, an ICF housing development offers a host of advantages. They can collect revenue on house after house, but only have to sell the job once.

Developments give the entire ICF industry a major boost as well. Outside investors may not see the potential when individual custom homes are sold here and there, but when entire concrete home developments appear, those same business people suddenly see the potential.

This magazine has spotlighted a few of these ICF developments in recent years. In most cases, the project was driven by an ICF installer or distributor, who took on the additional roles of general contractor and developer to see the projects through to completion. These innovative ICF professionals report that in nearly all cases, these developments sell quickly and at a premium price.

This indicates significant change and maturity in the industry. Ten years ago, Pieter Vanderwerf, a respected ICF consultant, was hired by the PCA to investigate what it takes to make a successful ICF development. His findings were discouraging. Starting with a list of 12 ICF developments in 10 different states, he discovered that two of the 12 were not actually ICF. Two others were abandoned before any construction work was performed. Two more went bankrupt early in construction, and a pair of others switched to wood in the early stages of the project. Only four projects were successfully completed as all-ICF housing, and of them, only one developer went on to repeat the experience. (See Succeeding with ICF Developments in the August 2010 issue of this magazine.)

In contrast to ten years ago, ICF developments today can be highly profitable, as the following projects demonstrate:

Casitas Veracruz, a 133-home development in Bakersfield, California, was completed in 2006, and is still the largest known all-ICF housing development. It’s an outstanding example of superior quality housing, marketed at an affordable price. The finished homes, which vary between 1,100 and 1,800 sq. ft, cost about $112 per sq. ft. The developer was Homecrete Homes. 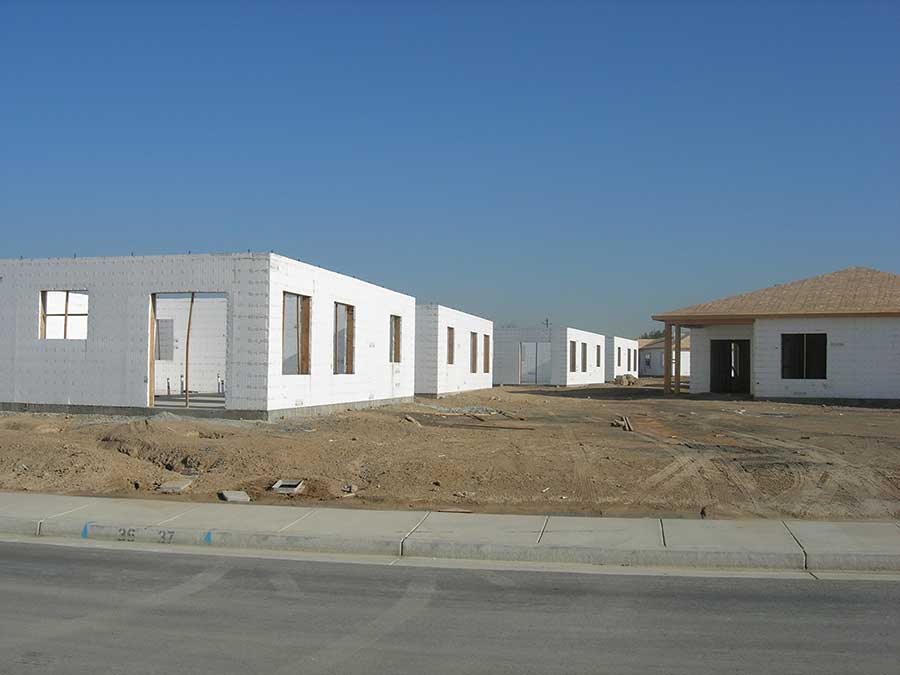 Completed in 2006, this 133-home development in Bakersfield, California, is still the largest known all-ICF housing development.

The same investment group that owned Homecrete at the time also owned an ICF brand, and an ICF installation company, which helped maximize profits. Also, floor plans were designed to be functional by eliminating wasted space and providing rooms families will utilize. One way the developer was able to control costs was by minimizing cycle time; the entire development was completed in about 11 months. Walls were pre-assembled in a controlled factory environment and delivered to the jobsite in numbered, panelized sections. This not only reduced jobsite clutter, but virtually eliminated waste and weather-related delays. Using the panelized sections, a four man crew could to erect, align, and pour all exterior walls in as little as a day and a half.

Another early ICF development is the Villas at Mont Blanc. Once again, the developer, general contractor, and ICF installer were owned by the same group of investors—in this case, Polycorp Developments. The 41-unit townhome development is just minutes from downtown Halifax, Nova Scotia, built on an overlooked site thought to be too noisy for a residential development. Fortunately, ICF walls eliminated that concern, and also brought significant energy savings.

Louis Lemoine, vice-president at Polycorp at the time, says “The impact on the surrounding community has been overwhelmingly positive.” “Our competitors thought we were nuts when we started construction… Now two years later, ICF construction is becoming more common in our marketplace.”

The Villas project was successful enough that soon after its completion, Polycorp began work on Ravenscraig at Fleming Park, an ambitious development of 76 single family detached ICF homes ranging from 2,600 to 4,500 sq. ft, about 15 minutes from downtown Halifax. 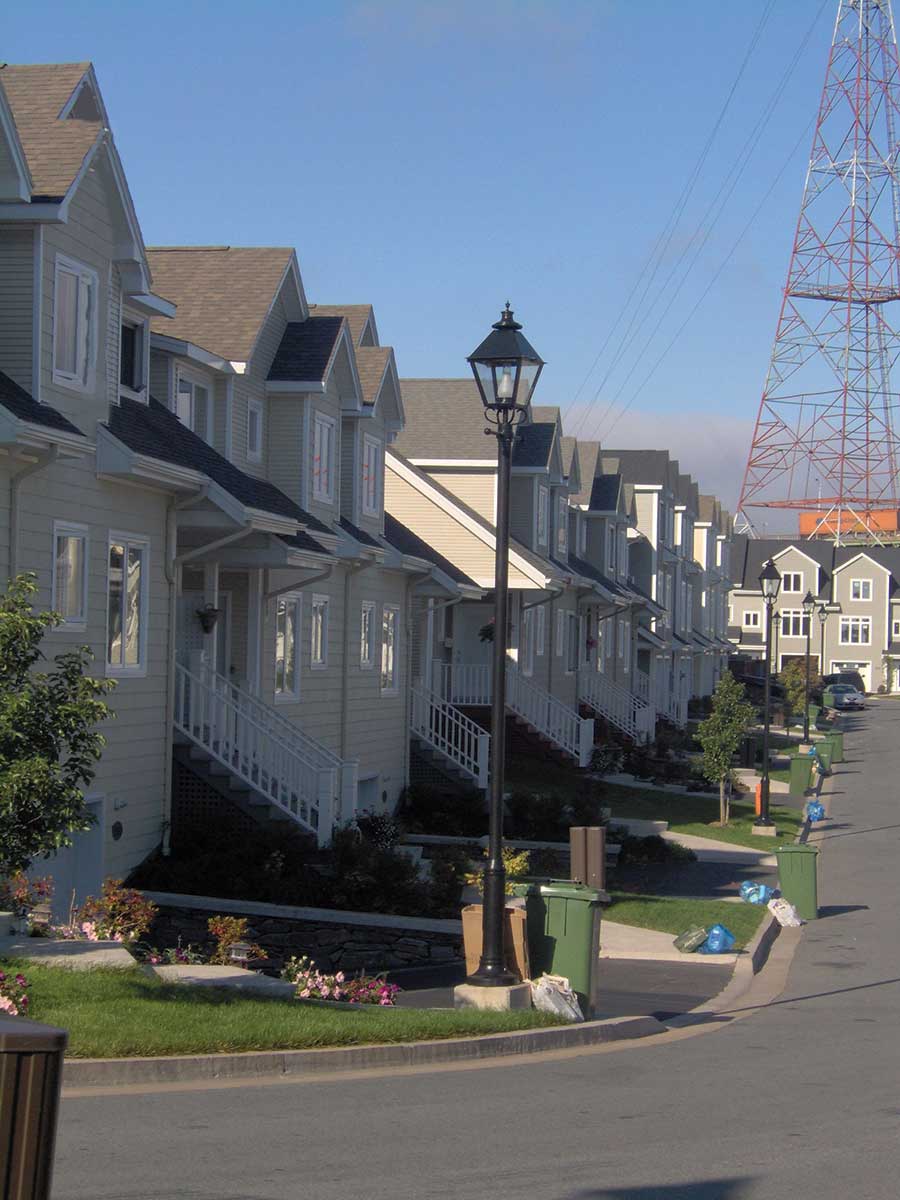 Built out over 30 months, this 40-home all ICF development in Halifax set a benchmark for profitabiity.

While most builders were struggling to survive the Great Recession, they built out the entire development in the 2007-2011 timeframe, selling all of the properties near full price.

Rather than aim for a specific demographic segment, the target market for Ravenscraig was a mix of empty-nesters, mature families with teenagers and young couples just starting families, which they attracted with a mix of 20 different floor plans and even more color schemes. 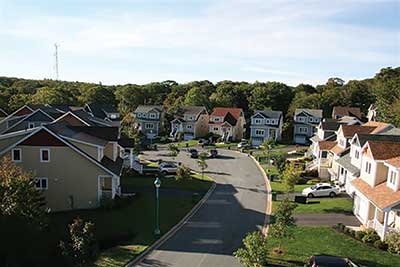 While most ICF builders were struggling to survive the Great Recession, Polycorp built out a 76-home development in the 2008-2012 timeframe, selling nearly all of them at full price.

Lemoine reports that the homes sold well, and resale values “far outstrip average price increases in the area.” He continues “We believe that that is an indication of the market’s perception of these homes as being of exceptional quality and value… Although the project took a little longer to complete than we had anticipated, we have met and exceeded our revenue projections for these homes.”

The Preserve at Mountain Vista

In upstate New York, Anthony Aebi built a nine-home ICF development that was remarkable in several ways. First, it was built on the same budget as a standard production home development. Second, every homes is rated net-zero, making it the first known net-zero energy development in the country. Completed in 2014, Aebi served as developer and general contractor. While he has built more than two dozen ICF custom homes, for this project he subbed out the ICF install work to meet the demanding schedule. 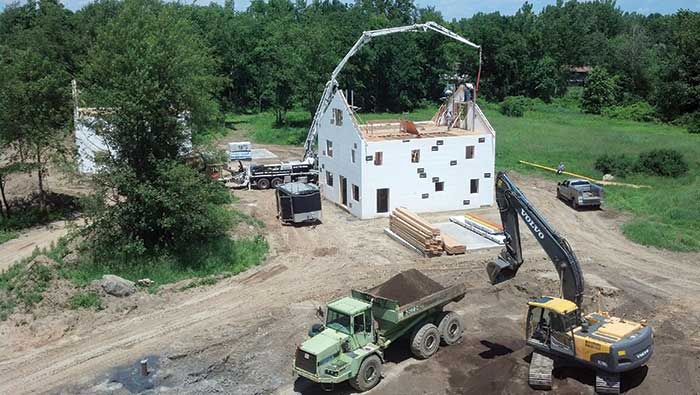 Built at the same cost as a standard development, every one of these New York homes is rated
net-zero.

He kept construction costs to $110 per sq. ft. by keeping floor plans simple, tightening up the schedule, and staggering construction so the pump truck could pour multiple projects at each visit. Spray foam was used under the roof deck to achieve an R-value of 60. Triple-pane windows, geothermal HVAC systems, and a heat recovery ventilator (HRV) were installed to complete the high-efficiency envelope. The model home received a HERS index of seven, 93% more efficient that the current code minimum. The average monthly energy cost is zero, and every home in the development was certified by the U.S. Green Building Council to at least LEED-Silver.

At the opposite end of the cost spectrum is the exclusive gated community in a well-off suburb of Scottsdale, Arizona. This 40-home development is built entirely of ICFs—including the entry gate buildings and the pool facilities—and is one of the most prestigious in America. Cullum Homes, the developer and general contractor, offered six stock floor plans, with seven of the 40 lots available for a custom home design. “The attributes of ICF lend themselves to ultra high end luxury construction,” says Brad Cullum. The homes have ultra-high-end touches, such as a hydraulic automobile elevator that allows the homeowner to display collector cars in a glass-enclosed “showroom” located on the lower level. 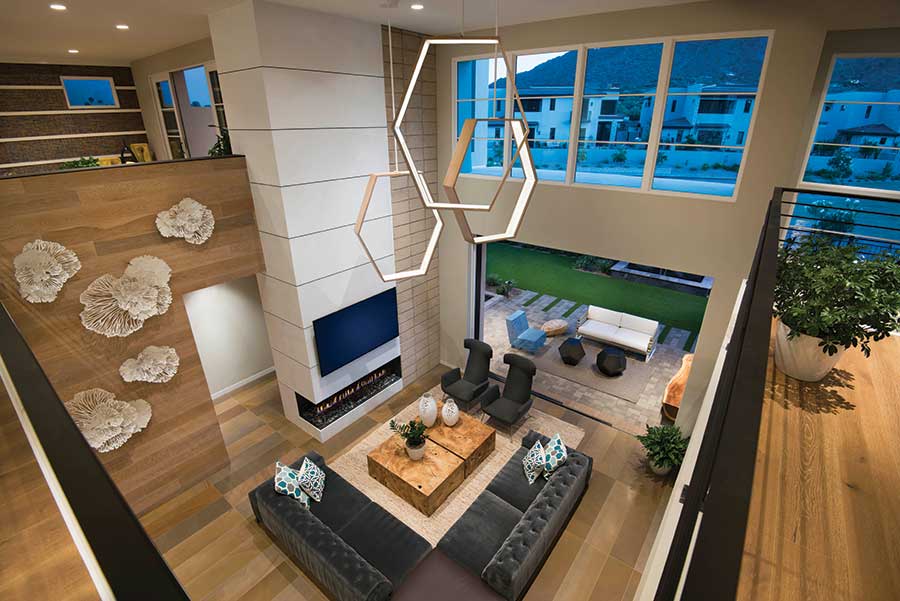 ICF homes in this 40-home development near Phoenix were listed at the highest cost per square foot in the entire area, yet 25%
of the units were sold before model home could be completed.

With a price tag between $2.3 and $2.6 million—nearly $400 per square foot—one might assume that marketing was a challenge, but it wasn’t. Despite being listed at the highest cost per square foot in the entire Phoenix area, the development was already 25% sold before model home could be completed. Completed in 2017, the development used 360,000 sq. ft of ICF.

Cullum says, “As a result of this high visibility project, we’ve seen major interest from other developers looking to offer the ultimate comfort and durability.”

The project has been successful enough that the developers are building out a similar 18-home ICF development nearby called Silverleaf.

Clearly, it’s possible to build out all-ICF developments and sell them profitably. The following pages spotlight two additional case studies. In addition to these single home developments, there are a large number of duplexes, four-plexes, townhomes, and other small multi-family projects that have been enormously successful. Links to these can be found in the online version of the magazine.

Vanderwerf found that the most successful projects had three elements in common:

Recent projects also show a strong preference for common ownership between the developer and general contractor. While ICF developments are often smaller and built out over a little longer time period than an average project, they have been successful at all points of the price spectrum and in a wide range of geographical locations.

For more information, read the complete project profile below. 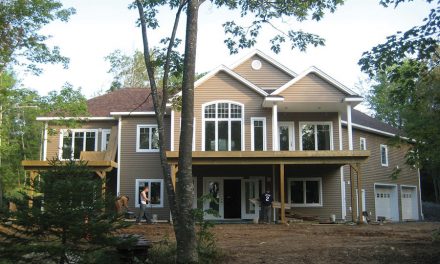 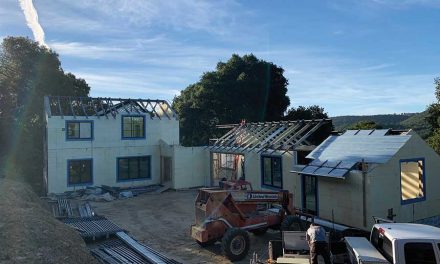