The Winds of Change

When this Pensacola-area neighborhood was hit by tornadoes in 2006, the ICF house at left
survived virtually unscathed while surrounding building were reduced to splinters.

552. That is the number of deaths that occurred from tornadoes in the
United States in 2011, the deadliest year since 1925.

250. That is the confirmed number of tornadoes in the U.S. this year to date, with 56 fatalities. 2012 has already exceeded the totals from the same time last year. Unfortunately this doesn’t bode well for the rest of the year.

My son, who is a member of the Army National Guard and currently stationed about 40 miles from Henryville, Indiana, saw the power firsthand. On March 2, 2012, this area was hit with a tornado rated as an EF3 or 4. His unit was asked to help in the following days to aid in cleanup, recovery and any way they could. When he called home to tell us about it, all he could say was “Oh my God, it was so sad.”

It was also after one of these recent storms when a national television morning show was reporting live “in the path of destruction” as they usually do. The reporter went on about the devastation. He then made a curious comment. He stated that he wished buildings could be made safer so that “these people wouldn’t have to lose so much.”

As a strong promoter of the ICF industry, my first thought was: “Why doesn’t he know there is a way? Why doesn’t he have video evidence showing a 2×4 traveling at 200 mph and splintering when it hits an ICF wall?” And the biggest question, “Why was there not a credible industry group on the ground with this material to provide to these TV personalities?”

The answer: There is nobody in a position to easily provide these things and the information that is available is old or proprietary. The question he presented was actually a double whammy. First, those watching on TV saw total devastation. Then they heard there was nothing that could be done. If it’s on TV, it must be
true, right?

What I have learned in my years of designing ICF homes is that I always get an uptick in ICF requests when an ICF system is shown on TV. It does not matter if it’s HGTV, Extreme Home Makeover or a newscast. Right or wrong, TV gives things instant credibility. I can tell my clients about all the many advantages of ICFs, and some see it and will trust in my experience. (That’s the reason why they hired me in the first place, right?) Others, though, need some television talking head to tell them it’s great. In 2008, I had five clients change from frame to ICF on the Monday following an HGTV program that featured an ICF home.

If designed correctly, ICFs bring a “one size fits all” protection when it comes to natural disasters. It has been proven that tornadoes and hurricanes pose little threat. They also offer resistance to earthquakes, fire and flood like no other building material. Yet when Mother Nature knocks a building down, the rebuilding is typically done with the status quo….wood.

It is the responsibility of all design professionals to encourage our clients to utilize the best materials available when building. It is our job to educate them about materials that provide not just aesthetic qualities but also provide a safe, secure and sustainable environment for the inhabitants. When we have a customer that is requesting ICFs, we need to make them feel more comfortable with that decision – not discredit the product and try to flip them to basic frame construction because it’s easier for the designer.

While we can’t force our clients to use a certain product, we can at least open their eyes to alternatives. Florida has made some of these products mandatory for certain construction types and in hurricane-prone areas. Projectile-resistant siding, roofing materials, and doors and windows are already on the market and readily available. ICF roof decking is also making strong headway into general practice.

Products are readily available now that could easily make a home tornado resistant–and with a little extra effort, possibly tornadoproof.

It is the responsibility of the ICF manufacturers and their representatives to promote all of the advantages of their product to the general public. When a client comes into most architects’ office and wants a building designed with ICFs, what is the architect going to say? (It won’t be, “take your money elsewhere!”) The fact is, they will design what the client requests.

They may try to push that client to use other materials at a future date, but if a customer is educated and stands their ground, they will have no other choice. And, if that architect has a strong working relationship with a manufacturer, the customer will have support from both directions. This makes the decision much more comfortable for everyone involved.

Education through combined promotion is how we get the message out. The ICF industry needs to find a way to come together and create a modern marketing campaign. This campaign needs to include print, video and social media promotion. It also needs to include educational seminars, not just for the trades, but for the general public. These seminars can be done at community events, home shows and local TV promotions. We should be making the mainstream media work for us rather than turn a blind eye, as is the case currently.

I know many companies are trying to do this on their own but clearly that’s not working for the big picture.

Tornadoes are going to cause havoc year after year. There is nothing we can do about that. However, we can rebuild stronger and better.

Here’s a hypothetical scenario: Imagine that same national TV personality coming to a ravaged area. The tornado hit in the middle of the night, with little or no warning. As the camera pans the horizon and shows piles of rubble scattered around what used to be a thriving neighborhood, an image starts coming into view of a lone ICF home, standing proud. He then interviews the homeowners and they talk about how their decision to build an ICF home saved the lives of every family member – and well worth the money they spent. What would that simple video be worth to the industry as a whole?

The key question is how to make that hypothetical situation a reality. A manufacturer promoting their product in the above scenario will be viewed as an infomercial. Credibility is lost almost immediately in the eyes of many. Having this information provided by a credible, standalone organization would carry more legitimacy.

One thing our industry has that is stronger than most is the passion to succeed. Most of us are willing to go the extra mile for the greater good. Unfortunately, we’re either too far down in the company hierarchy to make an impact, or are hindered by finances, or the companies we work for. A task this important is not an undertaking that can be accomplished individually. This can only be successful as a combined effort. As the saying goes, “Lead, follow or get the hell out of
the way.”

I am on a personal mission regarding the design and construction of safer buildings. Growing up on the fringe of Tornado Alley in Eastern Colorado, I saw my share of tornado destruction. Albeit not the massive devastation from an EF4 or EF5, but we regularly saw an EF2. On a visit in 2010 to see my family, I personally watched a small tornado cut across a corn field, then rip the roof off the local farm supply store and place it rather violently on the highway nearby. Luckily there were no deaths and only minor injuries, but that image will be with me forever.

More tornadoes, earthquakes, fires, hurricanes and floods are coming. When will the ICF industry be ready? The insurance companies have established what they believe is a reasonable cost associated to a human life. Could you put a dollar value on the life of your children, spouse, friends or family? Me neither.

Robert J. Klob is president of Robert Klob Designs, Inc., a full service residential design firm specializing in ICF design.  He can be reached at www.rkdzns.com, 866-584-2474 or robk@rkdzns.com. 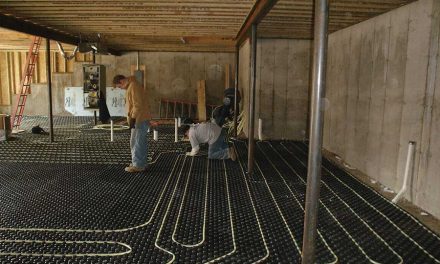