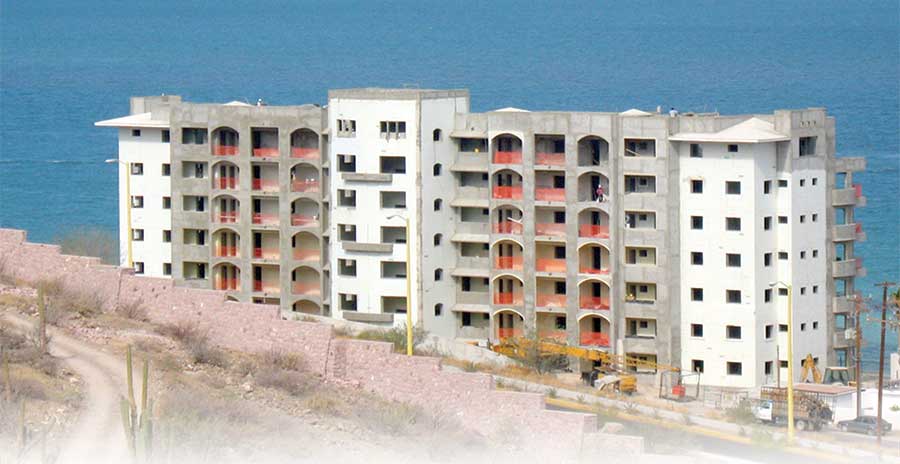 This seven-story luxury condominium, built on a white sand beach overlooking Mexico’s beautiful Sea of Cortez, is a remarkable example of engineering, education, and sustainability.

In the early years of the 20th Century, the city was known for its black pearls. Today, a new treasure can be found on the beach: La Concha Pearl, “The Pearl of La Paz.” The seven-story luxury condominium project is built to the highest sustainable building standards and makes extensive use of Insulating Concrete Forms (ICFs).

The California-based developers spent more than a year researching the best way to develop the land, eventually settling on a luxury condominium suited for vacation or retirement living, with elegant interior finishes and a modern design, which would still blend into the Colonial Mexican architecture that surrounds it. They also decided to take advantage of cutting-edge, energy efficient technologies to make it as environmentally-friendly as possible.

“I fell in love with the people and waters surrounding La Paz about five years ago,” says Hefner. “I felt that with this opportunity to live in paradise came critical responsibilities in regards to protecting the environment that could not be overlooked merely for the sake of additional profit. As my partner Dan Shore and I watched the sun set over the Bay of La Paz one evening, we made a commitment to minimize our impact wherever we could in hopes we may set an example of what can be done using leading edge technologies.”

Shore made the decision to build La Concha Pearl with ICFs. After meeting with New Tek, a Quad-Lock distributor who has pioneered ICF use in Mexico, the developers were sold on the system. Les Zwaryck, owner of New Tek, spent a few months redesigning the building to optimize it for ICF construction. New Tek also did the ICF install on the job—no small feat considering it used 60,000 sq. ft of wall forms and 80,000 sq. ft of EPS decking. 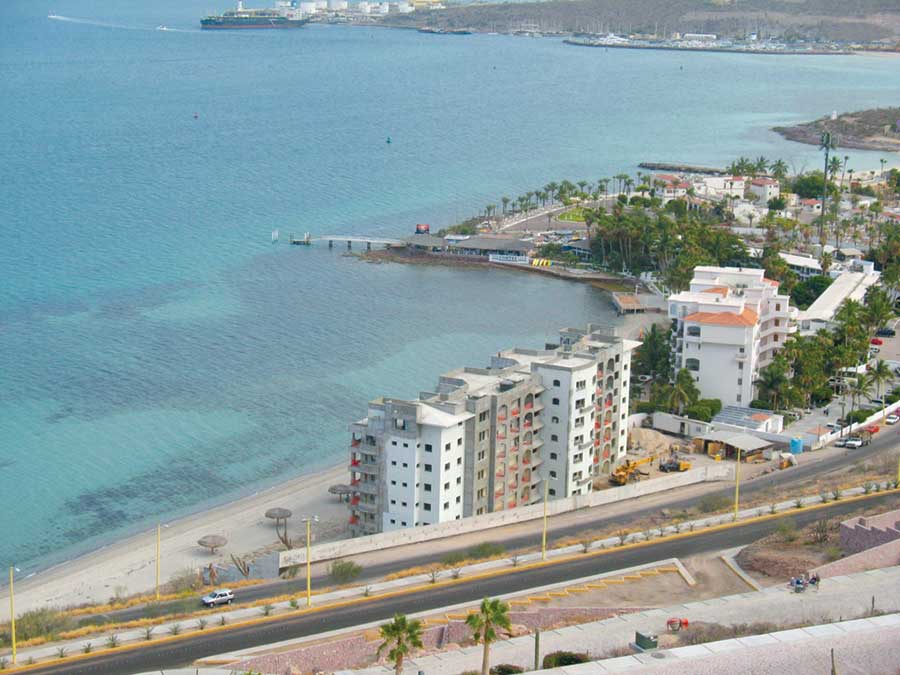 Shore is no stranger to the sustainable building movement, having worked for environmentally-conscious clients such as Yahoo! and Adobe. But, Shore believes safety and practicality should come first. That’s why he chose ICFs over earthen blocks. ICFs also have advantages over the traditional post-and-beam-with-CMU-infill construction common in Mexico. They offer seismic strength exceeding Zone 4 earthquake standards, the ability to withstand a Category 5 hurricane, and climate comfort. The Quad Deck Flooring System virtually eliminates any interior noise between residences.

Zwaryck was introduced to ICFs in the mid-1990’s when he was a residential homebuilder in Northern Canada. He moved to Baja about 10 years ago, building several projects—including his own home there—with ICFs. The cost of shipping molded block became prohibitive, so he switched to Quad-Lock, a knock-down system based in Vancouver, Canada. “The company is just excellent to work with,” says Zwaryck. “They solved all my problems.”

Quad-Lock ICFs, combined with passive shading, provide an estimated 50% reduction in cooling load at La Concha Pearl. Quad-Lock also reduced material handling, and was able to deal with the extremely congested rebar the design called for.

“Many developers overlook the energy savings you can create by shifting your thinking,” says Shore. 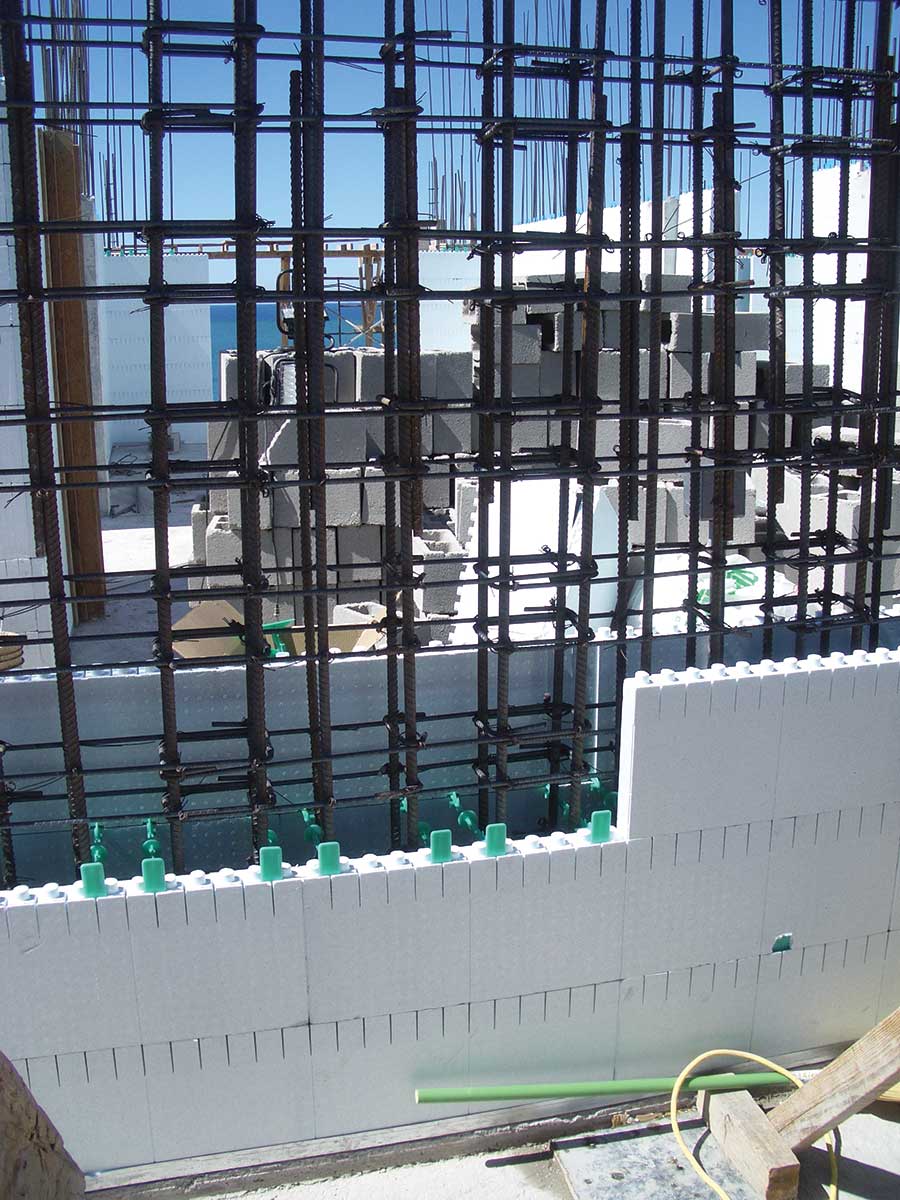 Designed to withstand earthquakes and hurricanes, the wall contained a tremendous amount of reinforcing steel. The job was made even more challenging because the rebar cages were tied together prior to the walls being stacked. Fortunately, Quad-Lock’s versatile panel made the job relatively easy.

“Energy efficiency is often overlooked by developers who don’t ever pay utility bills, and it is especially important in La Paz where summertime temperatures regularly exceed 100° F for months on end,” says Shore.

In addition to the super-insulated walls, the building uses an innovative cooling system. Instead of the typical 150-ton air conditioning system, it uses a half-sized 70-ton system coupled to evaporative coolers. An ice-maker comes on in the off-peak hours, which shifts 30% of the cooling load to the nights, further reducing utility bills by staying off the peak billing period.

The windows use E2-coated glass with thermal breaks, which dissipate up to 40% more heat than conventional dual-pane windows.

Solar panels provide year-round heating for the spa and pools and power the perimeter lighting.

The building is so green that it’s been submitted to the U.S. Green Building Council (USGBC) for LEED-Gold certification.

“La Concha Pearl is being built in such a manner that it will qualify for LEED certification,” states Hefner. “It would send a dramatic statement…if we achieve LEED-Gold, because it demonstrates that it is possible to build in a manner that protects [the environment], and remain profitable as well.” 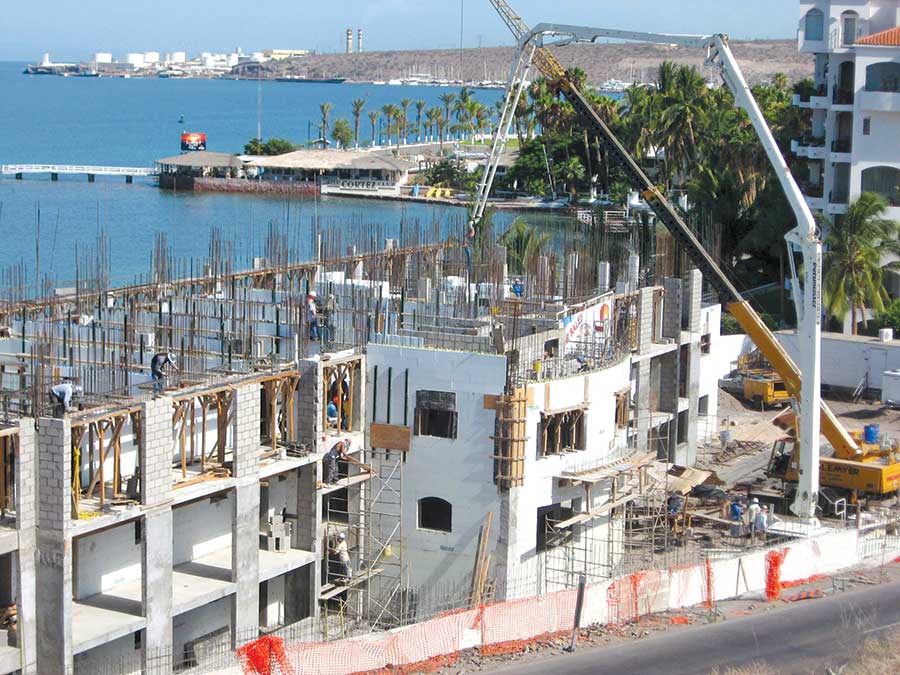 Construction began on the project in early 2007, with the first ICFs being placed in May. Zwaryck served as project manager at La Concha Pearl and oversaw the ICF installation.

“The structure is significantly over-engineered,” says Zwaryck. The building uses nearly 600 tons of rebar in the walls and floors. “The rebar in the walls is quite congested,” he says. “And the crews tied the rebar before the forms went up.” Fortunately, the Quad-Lock system allowed New Tek crews to stack each side of the wall independently, and then slip the ties through the rebar cages to connect them.

“The amount of steel in the walls led some engineers to think we’d never get the concrete to flow properly,” he says. Once again, a significant amount of education was required. Working with Cemex, they developed a specialized high-slump mix that performed flawlessly.

Because crews had to work out the challenges involved with rebar and mix design, the first floor took 45 days to form and pour. The rest of the floors, though, were much quicker. “Every floor was Quad-Deck, and it was slick,” Zwaryck says. “It worked flawlessly. We’d lay 6,000 sq. ft. in 3 hours.” By the time they reached the last story, installation crews finished the walls and floors in just 23 days.

As this issue goes to press, workers are putting the finishing touches on the PermaCrete exterior finish, and the interior will be finished shortly. The 33 residences, including five luxury penthouses, offer spectacular views of the Bay of La Paz. Half of the units, including two of the penthouses, are already sold.

The finished seven-story building is one of the tallest weight-bearing ICF structures yet built. It’s certainly the highest condo project built using Quad-Lock.

The project has attracted attention throughout the peninsula, and throughout Mexico as well. Daniel Hernandez, a New Tek principal, reports that several other Quad-Lock projects are underway in the surrounding area, including a 15-home development in Pescadero, slated to be the first green community in Mexico. A 200-home green development in Todos Santos is also in the planning stages.

“Our goal in bringing green methods to Baja Sur is to respect and maintain the value of the views and the natural environment that first drew us to Baja,” says Zwaryck. “Feeling green is not enough, we have to build smart.” 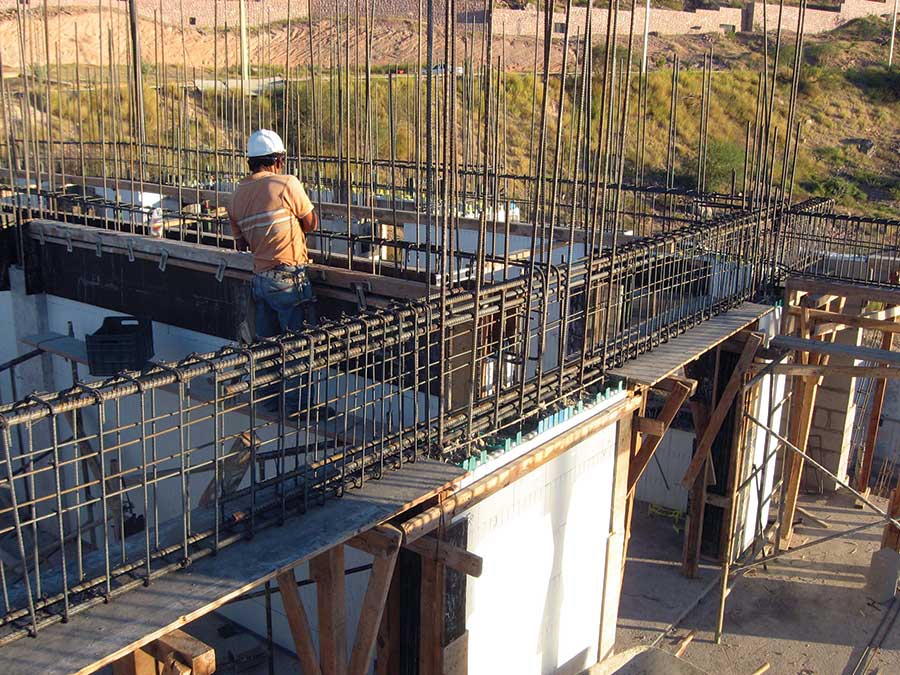 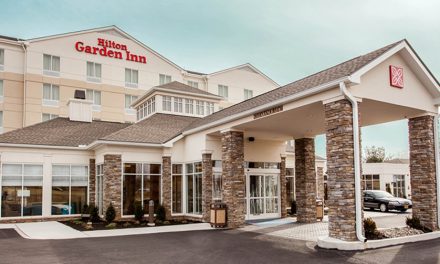 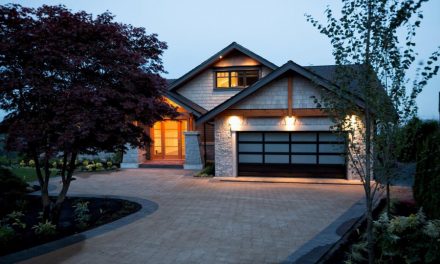