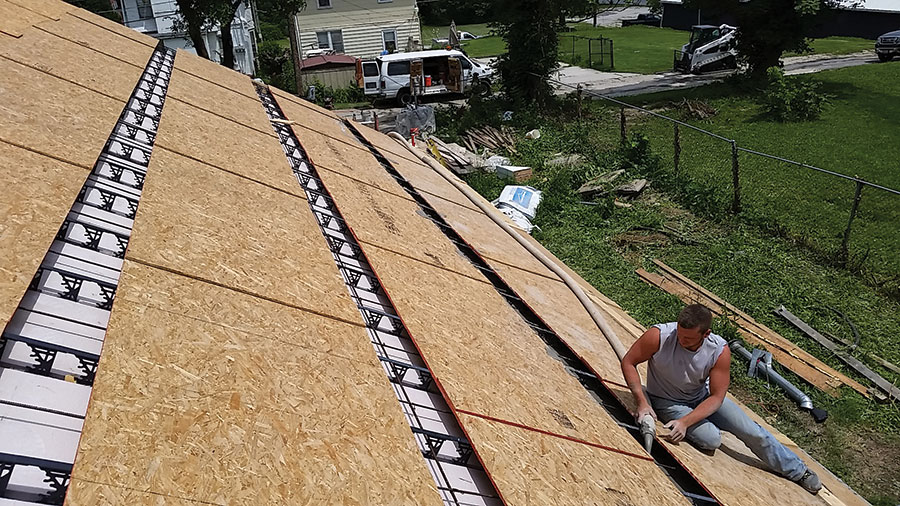 ICF walls have a well-established track record of surviving natural disasters. However, in “big wind” events—such as tornadoes and hurricanes—roofs have proven to be a significant weak point.

This fact was emphasized again in 2013, when an EF-5 tornado with wind speeds well over 200 mph churned a path of destruction through the suburbs south of Oklahoma City. A least two ICF homes were affected, and although they protected the owners’ lives and some of their belongings, both homes lost their roofs. (For more information, see Disaster Resistance: An Update in the Sept. 2013 edition of this magazine).

Similarly, in 2004 when a powerful tornado passed directly over the top of an ICF home in Kansas, the concrete walls saved the lives of the homeowners, their pets, and most of their belongings, but the tornado peeled off the roof and much of the interior suffered water damage.

ICF experts visited all three homes in the aftermath of the storms, and their assessments reveal a few guidelines for creating durable roofs in tornado and hurricane-prone areas.

With effort, wood-frame roofs can be built to resist winds up to 150 miles per hour. In south Florida, all roofs must be built to withstand 146-mph wind forces, and by using metal ties, strapping, and other reinforcement, most builders use wood to meet this standard. Kelvin Doerr, director of engineering and technical services at Fox Blocks, says, “Basically, it comes down to stronger, thicker, structural members with better connections. Use screws instead of nails. Use hurricane straps on every truss that tie back into the concrete core of the wall.” 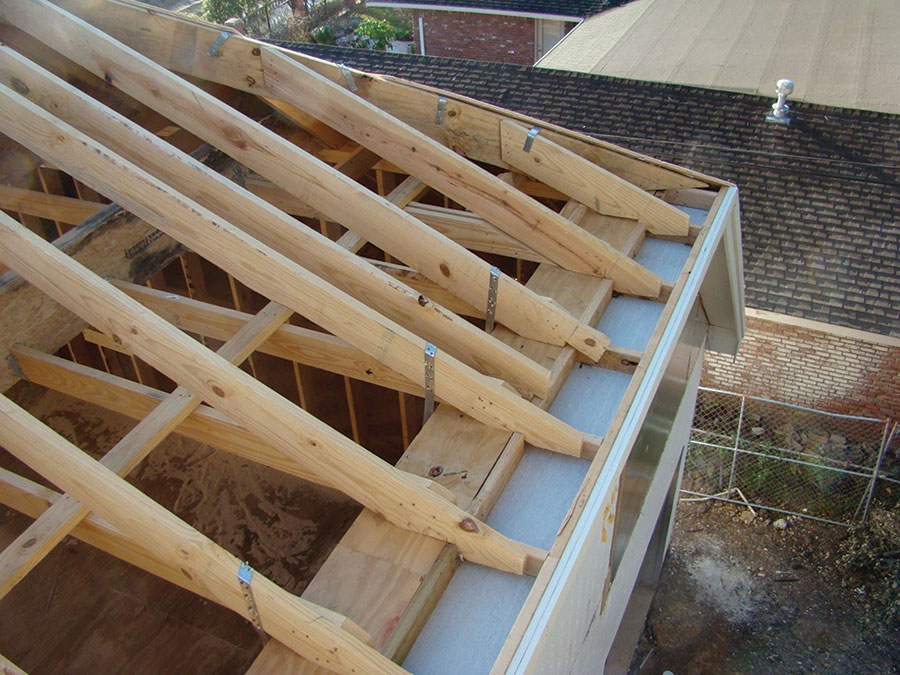 By using anchor bolts, metal “hurricane straps” and other reinforcement, wooden roofs–such as this one in Houston–can withstand winds in excess to 120 mph. However, tornadoes and severe hurricanes frequently generate forces stronger than frame roofs can withstand.

He also notes that roof design plays a major role. Hip roofs, for instance are more wind resistant than those with gable ends. Low-pitched roofs are stronger than steeper ones. The size of the soffits and overhangs are also significant factors.

Tornadoes are significantly more powerful than hurricanes. Even an EF-2 tornado has winds up to 135 mph, generating such enormous forces that even the best-engineered wood roofs will fail. And midwestern tornadoes sometimes generate winds of 200 or even 250 mph. Concrete is the only material that can hold up to these forces.

In 2004, an F2 tornado pulled the roof off an ICF home in Attica, Kansas. Amazingly, the event was captured on video (available on the www.icfmag.com website).

Scott Applegate, currently Fox Blocks territory manager for the Midwest, personally inspected the structure a few weeks afterwards. He says, “That home had hurricane straps on every roof truss, and it still lost the roof. In the video, you can see that the storm hit from the garage door side, and when that opening failed, it created a tremendous uplift pressure inside. When I looked at it, the Simpson ties were still attached to the roof plate, but every roof truss in that home snapped.”

He notes that the owners, their pets, and their possessions survived the tornado with little damage other than the roof, but the heavy rain that accompanied the storm soaked the carpet and drywall, and increased the repair bill significantly.

The EF-5 tornado that rolled through Moore, Oklahoma two years ago was a mile-and-a-half wide, with winds estimated at 210 mph. Doerr visited the site shortly afterwards. He says, “It just swept everything clean.” He says the only structure directly in the path that survived was the Warren Theater, built with tilt-up concrete and a metal bar truss roof. Two ICF homes were located just outside the worst-hit areas, and the damage around them was still extreme. “Structures around them were completely leveled,” he reports. 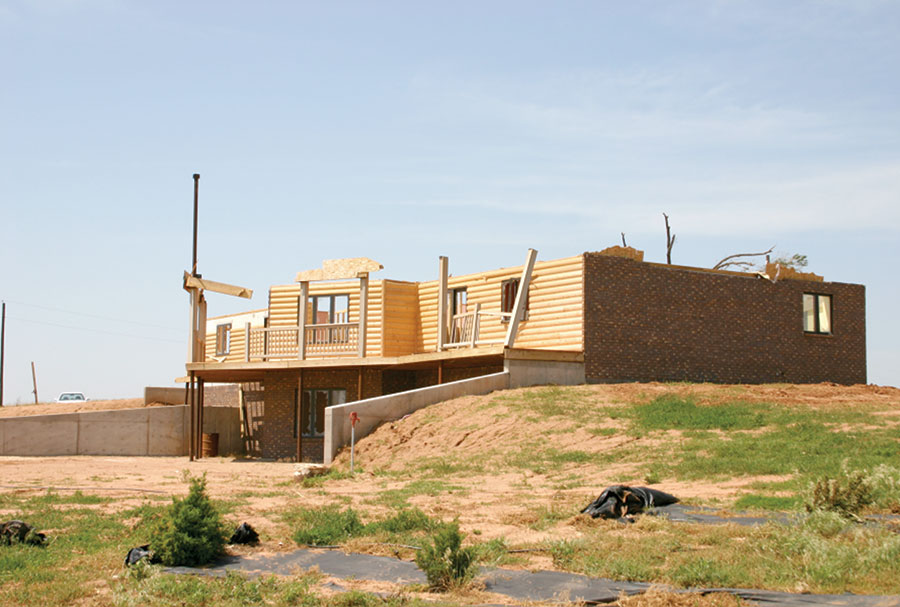 Hit by a moderate (F2) tornado, this Kansas ICF home lost its wood frame roof despite having hurricane ties. The walls did protect the owners and their belongings, although water damage was significant.

The intensity of the wind defies belief. At the ICF home on 149th Street, the wooden roof had been attached to the ICF walls with an anchor-bolted rim joist. And like most residential roofs in Oklahoma, it was built “one stick at a time,” rather than using pre-built engineered trusses.

“The walls performed well, but the roof disappeared,” reports Doerr. “In many areas the wood rim joist pulled through the top of the anchor bolts,” Electrical cables were pulled from their runs, leaving the outlets deeply recessed in the wall. The attached garage and detached shop, built with light-gauge metal studs disappeared entirely; the contents (lawn mower, jet skis, cars, and boat) were found a quarter mile away.

“Obviously a concrete roof would be the best structurally, but that’s not always feasible, especially in residential construction,” he says.

The ICF home in nearby Newcastle also lost most of the roof. In this case, the hurricane straps held the roof in place, but the tornado pulled off the plywood roof sheathing which left the inside exposed. Fortunately, the homeowner was sheltered in a “saferoom” off the kitchen that doubled as a pantry. With four ICF walls, a bombproof door, and a concrete roof, he was safe—even though the tornado threw a full-sized pick-up truck against the walls.

Luckily, only one percent of
tornadoes rate as EF-5. More than 90% have wind speeds of less than 135 mph. So a wooden roof built to Miami-
Dade hurricane-resistant standards should be able to withstand more than 90% of tornadoes. These upgrades are relatively inexpensive. On a typical ICF home, the difference between an ordinary roof and a storm-resistant one is $500 to $1000 of straps, hurricane ties, and
anchor bolts.

Human nature being what it is, Doerr reports that most of the reconstruction has been with the same wood-frame methods that proved inadequate. Just this spring—two years after the tornadoes— Oklahoma finally passed a law requiring hurricane ties. 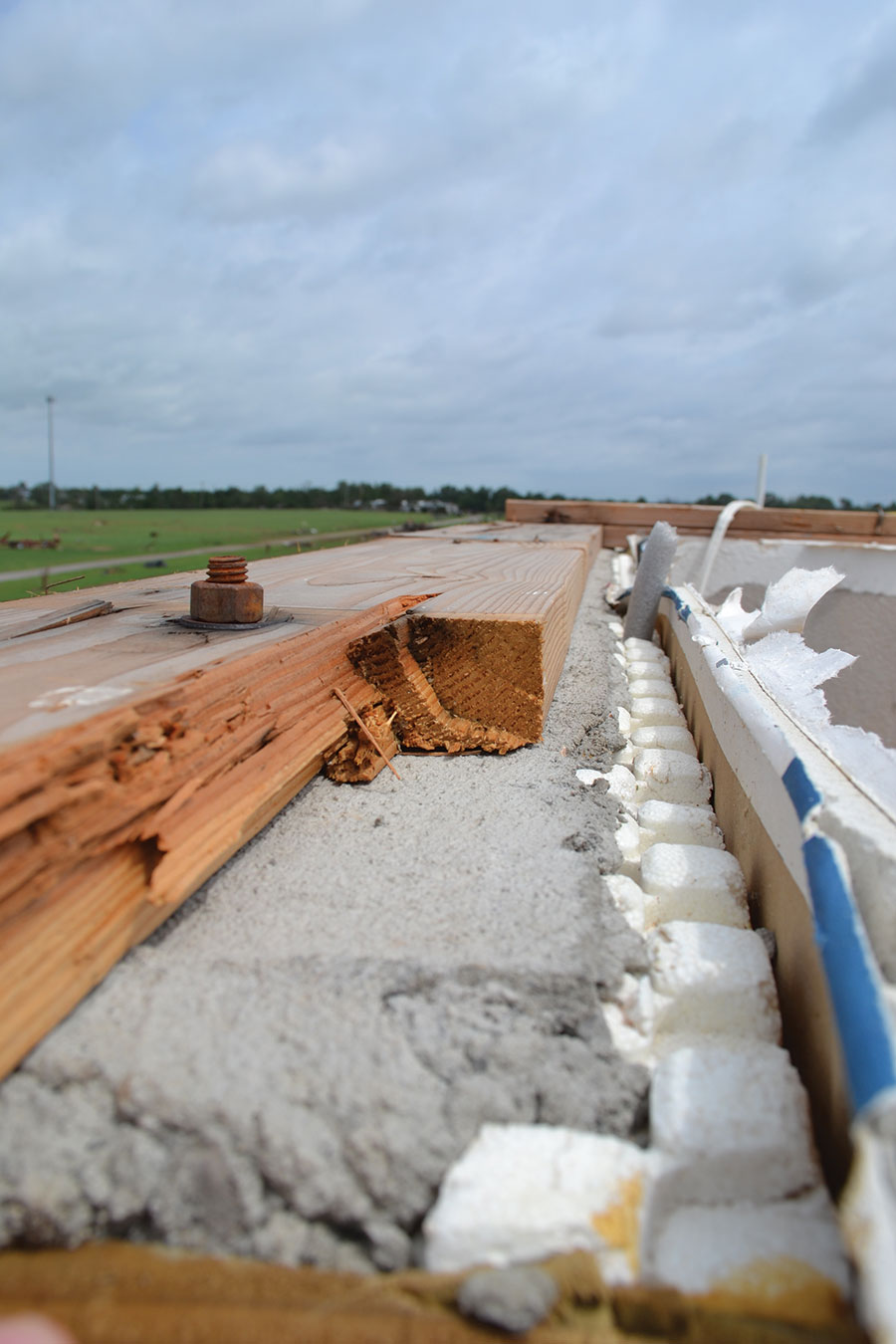 With 200 mph winds, no wood roof can survive. The pressure inside this Oklahoma ICF home was so great that it tore the sill plate to pieces or pulled it completely free of the anchor bolts.

He states that by tying the concrete walls and roof into a single steel-reinforced box, the structure will survive virtually any natural disaster. This type of concrete home construction has a proven track record going back more than half a century on the island of Guam. There, thousands of these homes have withstood repeated severe disasters, such as an 8.1-Richter scale earthquake in 1993 and typhoon Paka in 1997, which hit Guam with wind gust velocities in excess of 240 mph. Incredibly, there is no record of structural damage to any of the concrete shell homes from either of these mega-disasters.

Here on the U.S. mainland, and in Canada, concrete roofs are only rarely seen.

Applegate says, “Capping the whole house is done, but the cost is excessive.”

Chuck Vance, who represents the insurance industry’s Fortified for Safer Living program, agrees, saying most homeowners are unwilling to go to such expense. “People make decisions about what parts of their home to save and what parts to sacrifice.”

The key is to find a balance between safety and affordability that the occupant can live with.

Warnes says that the ICF industry has developed a very effective insulated roof deck forming system for disaster-resistant concrete roof systems that is incredibly easy to install, based upon his own personal experience.

Greg McDonagh, founder and CEO of Spider Tie, says it’s possible to put a concrete roof on a home for less than 4 dollars per square foot in materials. His system uses regular wooden trusses, engineered to carry the load of the concrete. “We like to use Magmacrete concrete, which weighs only 30 lbs. per sq. ft., and is about four times stronger than a wood roof.” McDonagh says. He says regular structural concrete can also be used the trusses just need to be engineered for the additional load. “The advantage is that our system will work with any roof design or pitch—even complex ones like mansard, gambrel, dormer, or lots of hips and valleys—at very little additional cost.”

A few builders have installed a sacrificial wood-truss roof over a flat concrete roof. If it’s hit by a major tornado, the wooden portion of the roof is destroyed, but the home and its contents remain intact.

Others sacrifice more. For instance, if a homeowner installs a concrete floor system (precast, or poured in place using EPS or steel pan decking) everything below the concrete floor becomes a safe room. The belongings above that level would be sacrificed in a major hurricane or tornado.

Taken to the extreme, this concept of a “sacrificial home” leads to the idea of a safe room, which can be built very affordably. Applegate, who lives near Wichita, Kansas, says basements are the norm in his area, so adding a safe room under the front porch costs only a few dollars more. “It’s really a minimal extra cost, he says, “and with a secure door, it can be used as a gun and jewelry safe, a wine cellar, or other secure storage.” 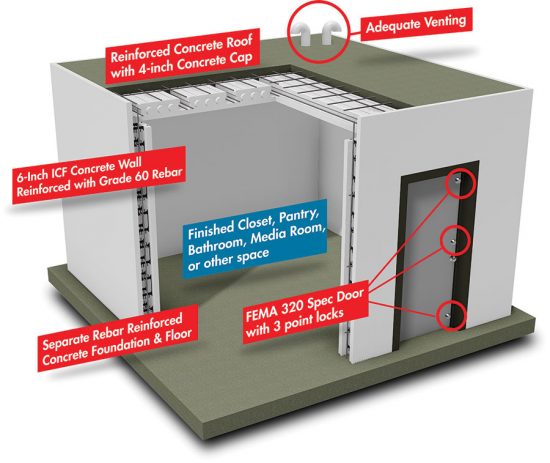 In slab-on-grade construction, safe rooms are also quite economical. Even if home is wood frame construction, an ICF saferoom can be a profitable add-on.

Ernst Kiesling, executive director of the National Storm Shelter Association, says above-ground safe rooms can be safer because they’re more likely to be used when severe storms move in, “People don’t get into shelters until the last minute, and by that time there’s usually already a lot of wind, rain, hail and, possibly, debris blowing around,” he says. “People look out the window and hesitate, and decide they’ll try to ride it out.”

Safe rooms in inconvenient locations are at a similar disadvantage. Applegate says some builders like to put safe rooms under the garage, but if the car needs to be moved to access it, it might not get used. He says, “What you need is a saferoom within diving distance. With ICFs, it’s possible to build an above-ground saferoom that doubles as a walk-in closet, laundry, or bathroom. A saferoom that’s easily accessible is one that will be used.”

Warnes says, “Regardless of where a safe room is located, it should be constructed with reinforced concrete, both walls and ceiling. It should be designed by a licensed structural engineer and should be sufficiently strong to bear the weight of a collapsing house as well as flying debris, some including motor vehicles. The expense of utilizing a licensed structural engineer is insignificant with respect to the prospect of needing shelter and not having it. There likely may be savings in annual insurance costs if a shelter is installed.”

Obviously, the importance of storm-proof roofing is going to vary from market to market. Even in areas prone to high-winds, buyers are surprisingly reluctant to pay for the security such a roof would provide.

Placing a “concrete lid” over just one floor or even a single room is an economical way to create a storm-proof shelter that will protect occupants and belongings from any disaster.

A few communities, such as Greensburg, Kansas, have rebuilt from tornados using storm resistant technologies—largely due to corporate funding from outside the community. Most, however, have not. “Joplin [Missouri] didn’t rebuild with anything better than they had before,” Applegate says. “It seems buyers prefer homes that skimp on the shell, but have nice finishes, rather than visa-versa. In reality, it’s far better to build a solid structure, and the owner can upgrade the finishes later.”