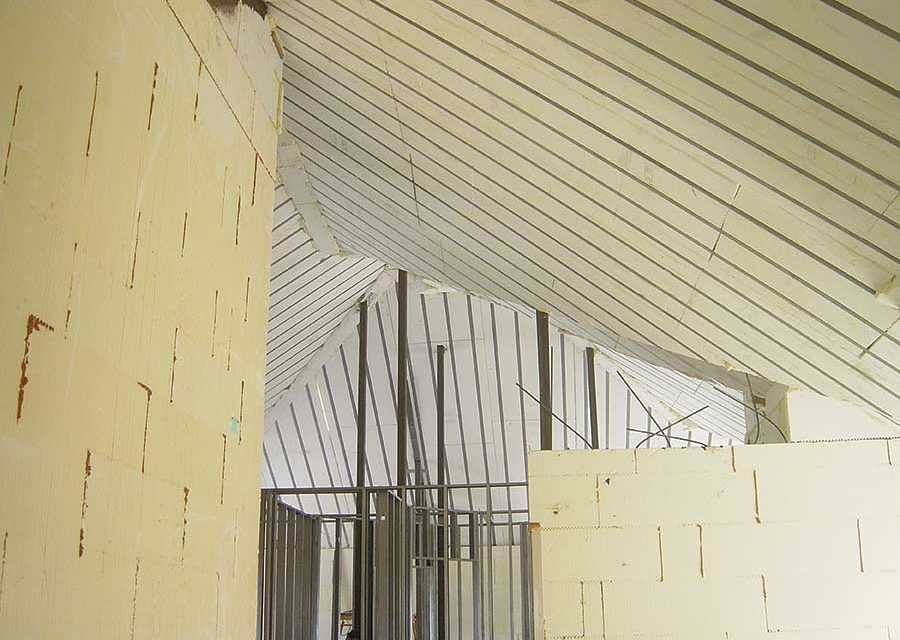 Topping an ICF structure with a concrete roof has a number of advantages. Perhaps the most obvious is disaster resistance. A concrete slab will protect belongs and occupants from hurricanes and tornadoes, and is completely fireproof. (For more information, see Total Shell, Total Protection on page 28 of this issue.)

They can support an enormous amount of weight, so concrete roofs can be converted into decks, rooftop gardens, or even additional parking space.

And coupled with a foam forming system, such as Lite-Deck, concrete can create a high-performance roofing system that “completes the energy envelope.” Just like ICF walls, the combination of foam and concrete in the roof protects interior spaces from outside temperature fluctuations. Near airports, these “ICF roofs” have proven to dramatically reduce sound infiltration.

But just because a home has a concrete roof doesn’t mean that it has to be flat. Thanks to innovative forming systems and improved design software, sloped concrete roofs are easier now than ever before. A few builders, like Mike and Dustin King of Ateg Engineering, are taking on incredibly complex roof designs, with multiple hips, valleys, and ridgelines, and constructing them out of concrete.

Foam decking creates a series of beam pockets, which are filled with reinforced concrete. Pockets running parallel to the ridgeline are usually cut into the foam on site. Some designers recommend a monolithic slab poured over the top of the beams. Others design the final roof finish to be applied over the foam.

The Kings have designed and built a number of complex, sloping concrete roofs in North Texas. One was installed on the 15,000 sq. ft. Hoffman residence just east of Dallas in Forney, Texas. It has 15 rooms on three levels, and the roof is unbelievably multi-faceted. King even did the bay window roof.

“Most of it was done the same way we do a typical Lite-Deck installation,” says Dustin King. “When it’s on a slope like that, we take a piece of wood and cut it to match the slope, so the shoring can brace off a surface parallel to the floor. We can run a screw through the top of the bracing, through the wood and into the light-gauge steel stud to make sure that nothing moves.”

He uses adjustable Pro-Shore bracing, with beams running 6 feet on center and posts about every 4 feet.

King uses a regular low-slump concrete for most roofs. “We used a 3-inch-slump mix on that project—it has a 7:12 slope—and it stayed in place no problem. I think the steepest we’ve personally done is a 9:12 pitch, and it worked out just fine. 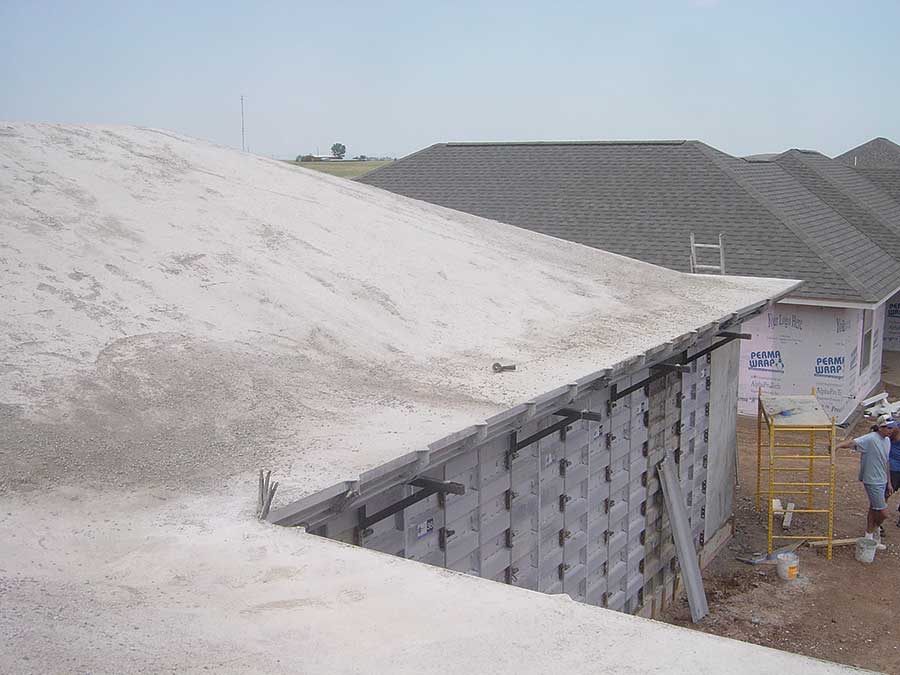 Foam decking can be capped with a solid concrete slab for maximum protection, or finished with just the beam pockets (below) The decision will affect the amount of bracing required when the foam panels are set in place (below)

Pat Boeshart, inventor of the Lite-Deck system, points out that placing concrete on a sloped surface is not new. “They’ve been doing it since the 1960s on concrete-lined canals and stormwater drainage channels,” he says.

Perhaps the most difficult challenge for sloped roofs is the engineering and design work.

“A sloped concrete roof is much more complicated,” King confirms. “Hips and valleys have to be engineered, and a lot of it is using experience and professional judgment.”

On the Hoffman home, King spec’ed a steel I-beam at the ridge line, with the Lite-Deck running perpendicular to the ridge. “We’ve done a lot of steel ridge beams, but we’ve also done a number of concrete beams too,” he says.

Channels for concrete beams were cut into the foam at all the hips and valleys. A channel was also cut in the foam halfway between the eaves and the primary ridge line, to tie the other concrete beams together and help support the ridgeline. 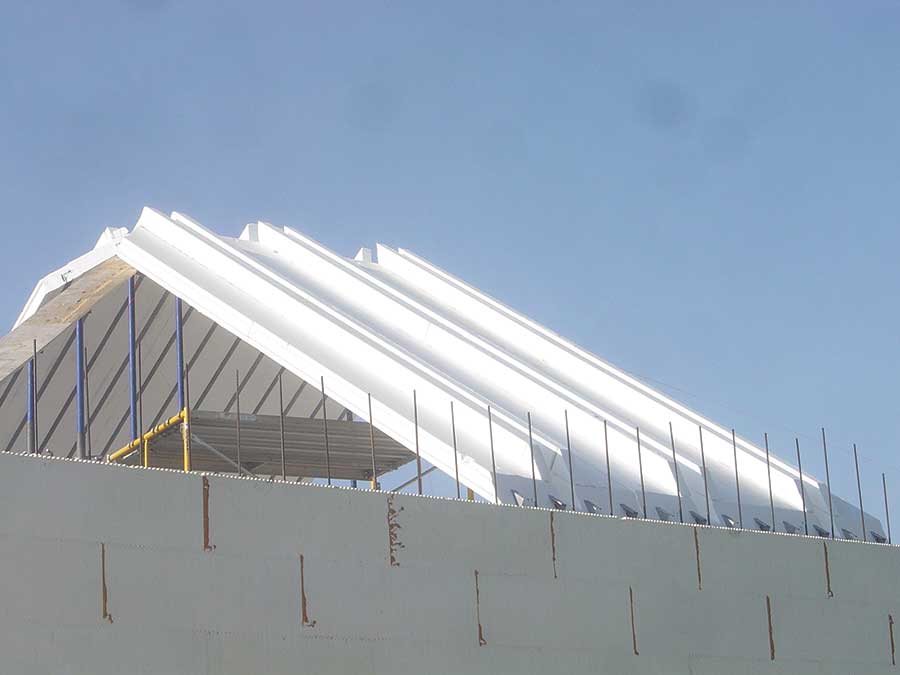 One unusual feature of this home is that the roof does not have a monolithic slab poured over the Lite-Deck. Concrete was placed in the beam pockets level with the surface of the foam, but no additional concrete was poured above that.”

“There’s no reason why you couldn’t do the slab,” says King. “In this case, it was just the way it was done.” The roof was surfaced with Fossilcrete, which was stamped and colored to resemble shingles. The same product was used on the exterior walls, which were carved to resemble ashlar-cut limestone.

Cloyd “Joe” Warnes, a concrete expert and consulting engineer, has more than 40 years of experience with pitched concrete roofs. He built one of the first “all concrete” homes in California in 1966 as part of a study by the U.S. Dept. of Housing and Urban Development (HUD). Warnes points out that if the concrete roof is properly tied into the ICF walls, the entire structure is significantly stronger.

That’s precisely what King did with the Hoffman home. “We brought the bars out of the ICF wall several feet and tied them into the roof beams. All of the beam connections have ample connecting steel in them.”

All three major brands of foam decking, Lite-Deck, Insuldeck, and Amdeck, have engineering details available on how to make these connections.

Warnes notes that pitched roofs can be built using a number of other technologies—such as steel joists and plywood—but only foam decking includes the insulation, sound attenuation, and other features most owners will want.

At a presentation he gave at the fall 2006 ACI meeting, he explained the general design process. First, design the structural supports at the ridgelines and in the valleys. Second, determine how the building eaves will be formed and shored. Next, calculate the planking (or other forming) requirements, shoring and rebar needed. 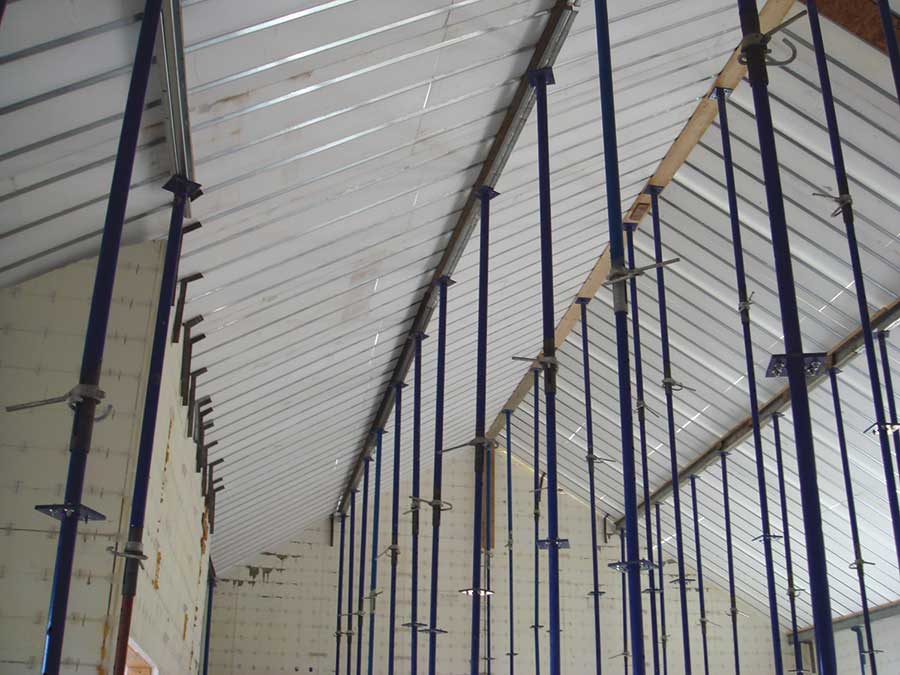 The actual construction process follows those steps quite closely. After the ridgeline beams are installed, contractors form the eaves, shore them, and then place the forming for the rest of the roof. After that is also shored, the rebar is placed and tied into the walls. Any additional beam pockets are cut into the foam at this time. When everything is in place, the concrete is poured, first in the beam pockets, and then as a slab over the entire structure.

The Hoffman home is built without eaves, but King says there are a number of different ways it can be done. “We’ve done it a couple of different ways. You can end the concrete at the wall, but run the foam out past the wall as eaves. We’ve also formed the eaves with plywood, shored it real well, and poured it with the rest of the roof.  Western Forms has an eave form that we’ve used and had good success.” Another possible method is to frame out the eaves as with traditional construction. 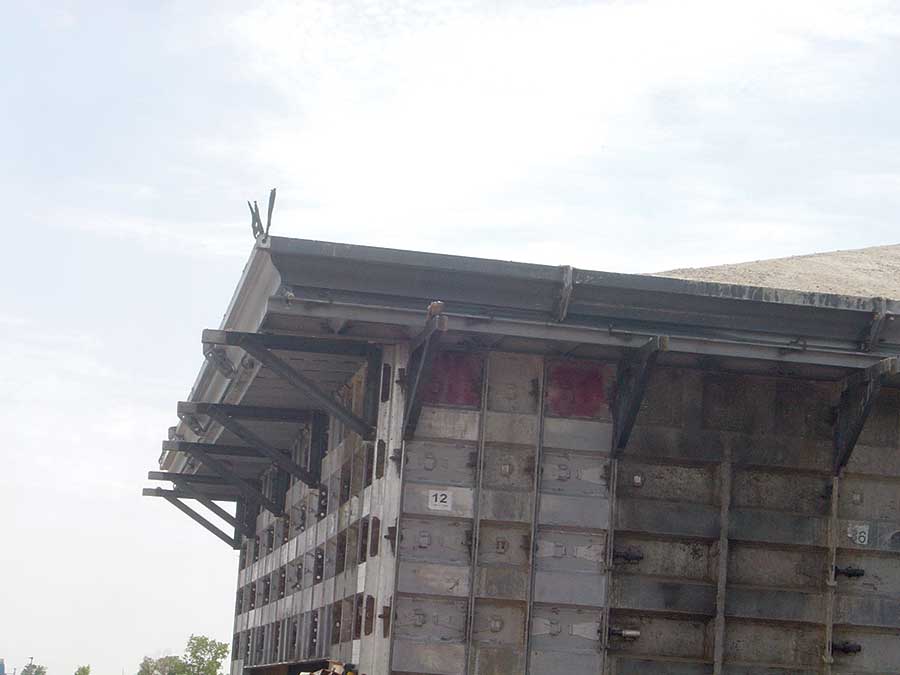 Whatever method of pitched roof construction you choose, King says one key is to work closely with the installer and manufacturer. “The beams on that job came out of out plant at Amarillo, and were delivered to the jobsite pre-cut,” says King. “We worked closely with Ross Raines [the builder] to ensure it went well.”

With foam decking, interior finishes are installed just like they would be in ICF walls. Chases and light boxes are cut in with a hot knife. Insuldeck has pre-cut utility chases molded into the foam. Sheet rock is attached to the integral furring strips. Sometimes, a dropped ceiling—similar to commercial construction—is installed.

King and Warnes are both enthusiastic about the future of pitched concrete roofing. Warnes claims that with the worldwide availability of foam decking, “the last barrier to practical construction of all concrete houses has now been breached.”

King was introduced to the technology through Pat Boeshart and others at Lite-Deck, and calls it “the greatest thing.” “It really is a great product,” he says. “We’re still developing what you can do with foam.” 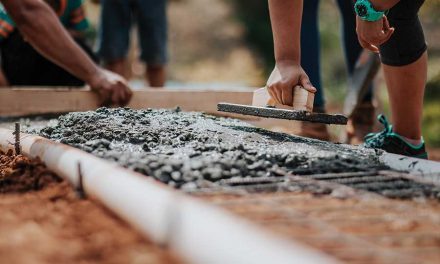 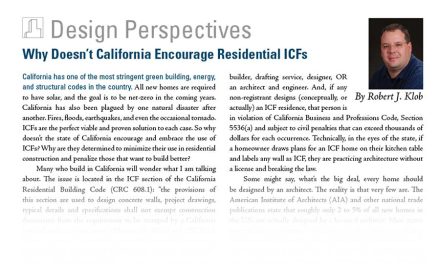 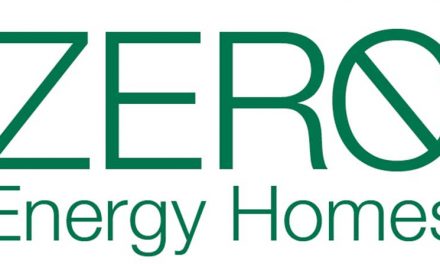