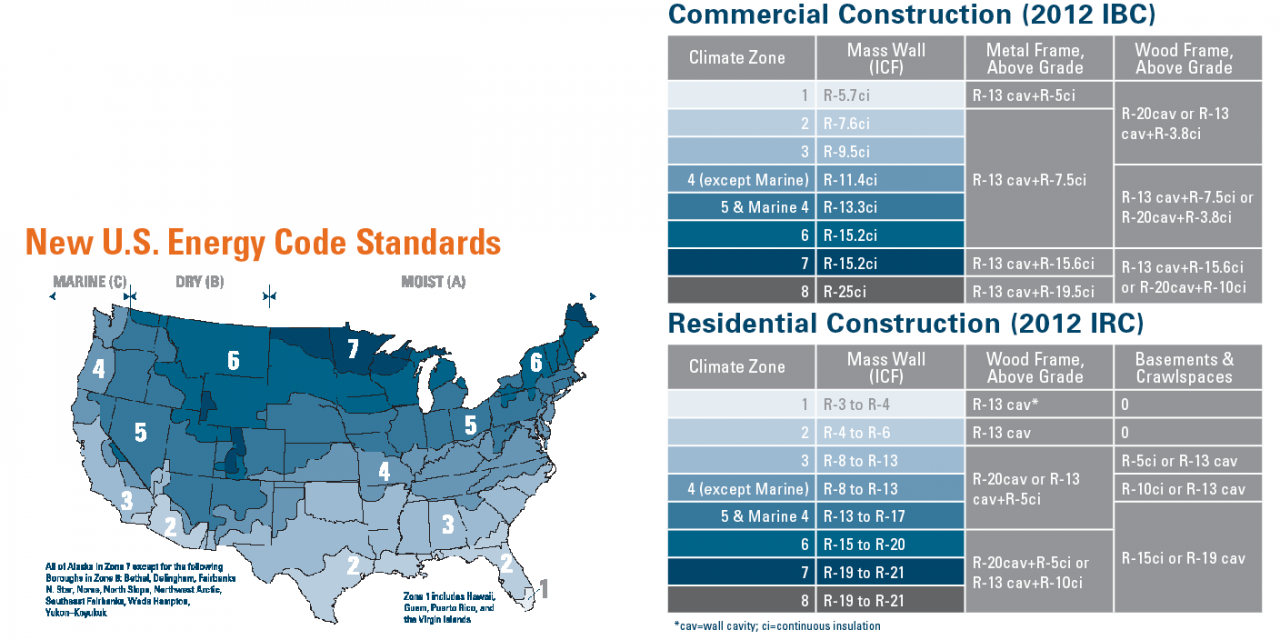 Since energy codes were first developed in the 1960s, they have moved in a single direction: higher efficiency and more insulation.

For ICFs, which have sometimes struggled to compete on costs, these changes could lead to a significant boost in market share. As insulation requirements become more stringent, CMU and wood frame will become relatively more costly. ICFs, which meet most of the requirements already, should gain ground as the cost differential disappears.

Pieter Vanderwerf, a longtime observer of construction trends, points out, “Canada has always been ahead of the U.S. in insulation requirements, and it makes sense because it’s so much colder there. But historically, they’re both trending in the same direction, and universally its moving toward higher requirements for insulation. As energy costs rise, and interest in sustainability grows, tighter codes makes ‘dollars and sense.’ ”

“Building codes are moving forward,” says Andy Lennox, vice-president of marketing at Logix. “They’re calling for better insulation in Canada and in the U.S., and they’re going to keep doing that for at least the next five years.”

“What we’ve seen over the last few years is that governments have realized we need to build energy efficient buildings,” says Gary Brown, vice-president marketing at Amvic Systems.”

NBCC-2010
The Canadian code differs significantly from its U.S. counterpart. Instead of being prescriptive, its energy requirements are performance-based, and take into account not only the R-Value of the wall, but also the furnace efficiency and fuel source.

Because it’s a performance-based code, it’s one of the few regions that formally recognizes that ICFs perform far better than their R-Value alone would indicate. An ICF wall is virtually airtight, with a continuous layer of insulation.

In a standard wood-frame wall, nearly 25% of the wall is framing. So while a 2×4 stud wall is insulated with R-13 insulation, 25% of it is actually R-5, and combined with air infiltration, installation mistakes, and other factors, the wall system will rarely perform better than an R-9. That’s why the Canadian code requires higher R-Values for wood.

In 2008, British Columbia pushed the minimum wall insulation to R-20, regardless of heat source, and increased attic space insulation requirements from R-44 to R-52 in the colder areas of the province.

Insulation requirements for NBCC-2010 are taken from the Model National Energy Code of Canada for Buildings 2011 (MNECB 2011), and covers the building envelope, HVAC systems, water heating, lighting, and electrical. Basically, MNECB 2011 requires all new homes to be built to EnerGuide 80 standards—20% more efficient than the previous iteration.

For Zone 8 in the northern part of the nation, ICFs will need to provide insulation equivalent to R-23.7. Wood frame assemblies will need to be R-31.

SB-10
The province of Ontario is at the forefront of the movement toward more stringent energy codes. SB-10, which went into effect January 1, 2012 places higher insulation standards than anywhere else in North America. Although it differs from NBCC-2010 and MNECB 2011, the intent is the same: to require more air tight structures with greater thermal insulation values.

The Ontario Ministry of Housing is reportedly considering requiring even more insulation in the next round of code updates, as is British Columbia. At the current rate, some pundits suggest that by 2030, all new construction in Canada will be off-the-grid.

Other provinces are incentives to encourage efficiency. In Alberta, owners of new single-family or multifamily row homes are eligible for a $3,000 rebate if they meet EnerGuide 82 standards. A $10,000 rebate is available for new homes that comply with EnerGuide 86.

“The changes to Canadian codes are creating incredible opportunities for ICFs,” says Ken Williams, “In Manitoba and Saskatchewan, nine out of ten foundations are being formed with ICFs, and nearly one in ten is using ICFs all the way to the roof.”

Mike Kennaw, vice-president of sales at Fox Blocks, expects the higher R-Value requirements to ripple across all of North America. “Looking to the future, what we saw coming from the Canadian code requirements were higher R-Values and higher U-Values, basically better insulation,” he says. “We needed to have a solution before it showed up on the doorstep.”

Like many other leading brands, his company has developed solutions to build walls with R-Values in excess of 30. (See Extreme R-Value: Going Beyond R-30 on p.10) 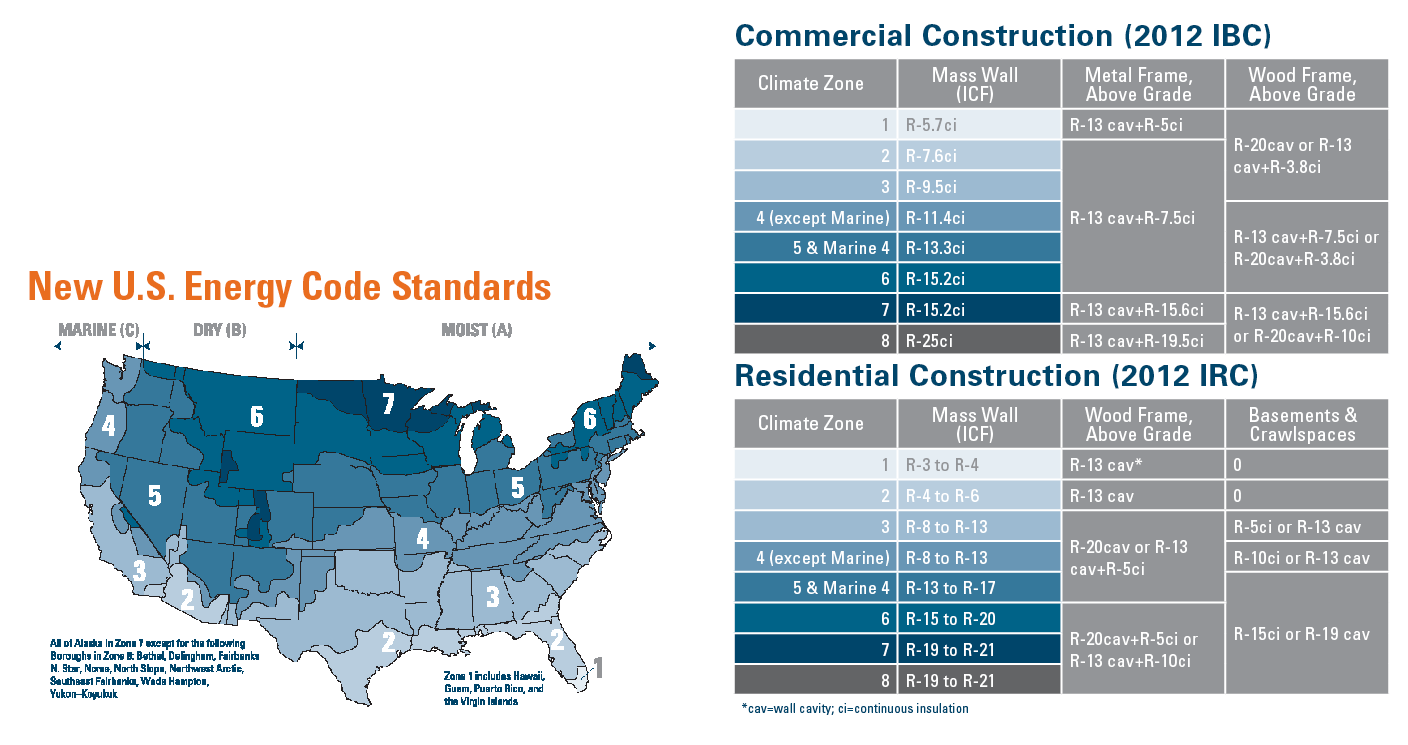 Connecticut requires walls to be R-19 (plus finishes) and Florida is very actively looking at R-30 in the walls.

Construction in most areas of the U.S. is governed by the International Building Code. This was also updated within the last 18 months with higher energy-efficiency requirements. The 2012 IBC (for commercial construction) and IRC (for residential) are based on the 2012 International Energy Conservation Code (IECC).

IECC centers on creating buildings that use 30% less energy than required by the previous (2006) edition. The U.S. code also differentiates between wall systems (ICF vs. metal and wood-frame) and insulation types (cavity vs. continuous). These values are shown in the tables below.

Cautions
While energy codes are moving up, that does not mean ICFs will automatically gain a larger share of the market.

Energy code enforcement tends to be lax in most areas, and tighter code requirements may not translate to better buildings if compliance isn’t monitored. Municipal budgets have been hit hard by the recession, leading to too few code officials (plan checkers or inspectors) in relation to the uptick in construction. Given the limited resources, they tend to focus on life/safety and sanitation issues—not energy. Finally, both designers and inspectors will need to get up-to-speed on the new code requirements.

Still, the changes are a net positive. At the very least, the new codes can be used as a reason to spec (or switch to) ICF construction. Also the changes point to a positive trend.

Vanderwerf predicts that the U.S. will continue to move toward performance-based codes. “RESNET has been signing up a very large number of regional builders to get their homes rated and publicize the ratings,” he reports. “For a quality builder, it makes sense, because they can publicize how much better their homes perform to the one across the street. Thermagraphic photography is also less costly, and will inevitably become more common as well.”

“This is the last logical step of this evolution,” he says. “Codes will move beyond prescription to a performance-based system, and that bodes well for the future of ICFs.” 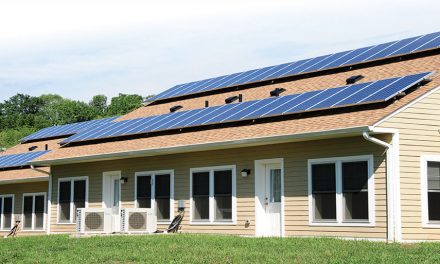 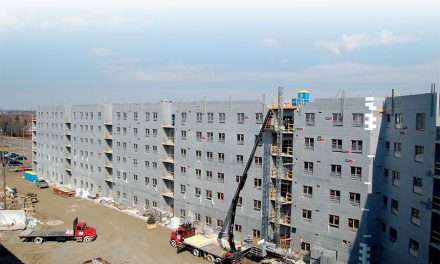