As ICFs grow in popularity for commercial projects, particularly for foundation work, contractors face the crucial challenge of making sure they are adequately waterproofed.

Waterproofing is usually associated with basements, which have not always been common in commercial buildings. But there are some indications that this is changing – especially as the commercial office market tightens and prospective tenants begin demanding more value for their dollars, including, in many cases, usable space below grade.

“It’s nowhere near what you see in residential,” said Steve Gross, of Certain-Teed, which markets Form-A-Drain footing drains and Platon drain sheets. “But… it’s not uncommon for them to have some below-grade space.”

When commercial buildings do have basements, they are often deeper than the typical residential basement. Gross said waterproofing the deeper foundations found in commercial structures is not too severe a challenge– provided contractors have the right materials and install them correctly. 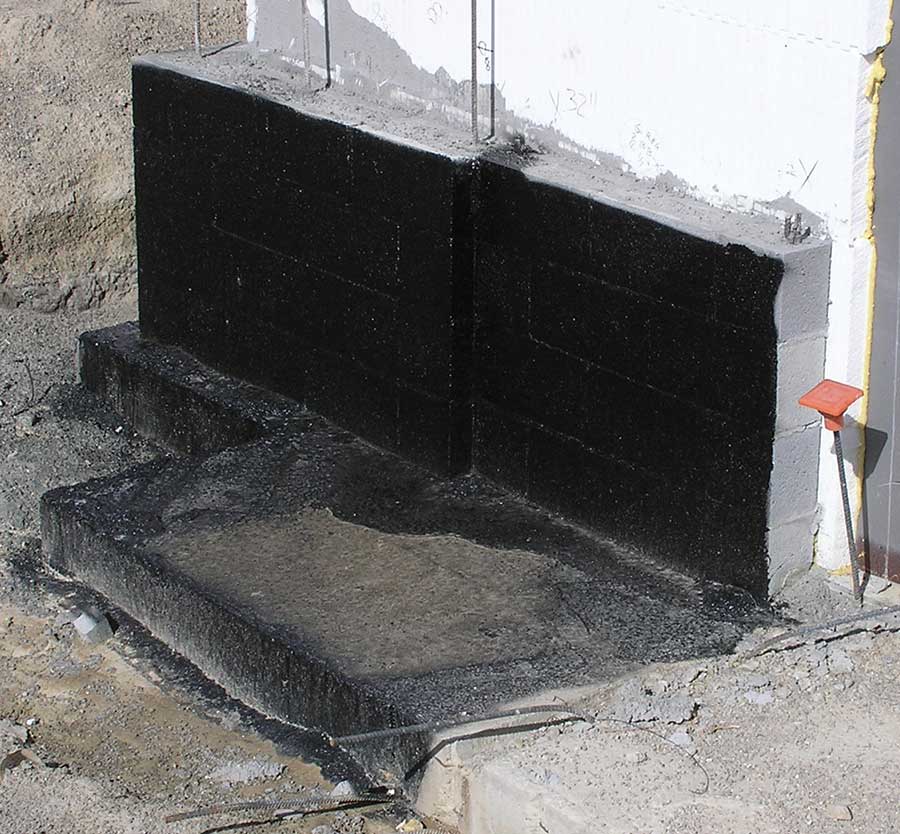 This project was able to use a solvent-based, spray-applied waterproofing membrane by building a brickledge out of concrete block around the perimeter of the building.

“If you look at a waterproofing membrane, they’re available in different heights that suit different walls,” Gross said. “If you have a tall foundation wall – taller than one single roll will cover – you can always overlap the rolls. That’s the only step you need, and it’s not much of a challenge.”

Sources emphasized that several factors are key for waterproofing ICF projects, particularly in commercial projects, including:

Structural Integrity: The concrete core of the wall must be structurally sound with no honeycombs, voids, or cracks. This ensures the overall effectiveness of the system and is absolutely crucial in preventing backfill damage.

Redundancy: Multiple membranes and other methods of achieving redundancy provide needed insurance against a breach at any one level.

Effective Drainage Systems: Water that is prevented from seeping into your foundation walls still needs to be directed away from the building. Drainage systems that use the wrong material or the wrong slope, or that fail to interact correctly with sump pumps and other apparatus, will merely result in standing or collecting water that further endangers your building.

The stakes are higher, too. Failed waterproofing on a commercial ICF project is a much bigger disaster – with far more money lost as a result. The right products, the right applications and an effective partnership with other contractors on the project will not only ensure the job goes well, but may also preserve access to that next big-ticket commercial project.

Jim Buttrey, senior vice president at IntegraSpec ICF, said improper techniques at a variety of points in the construction process can interfere with effective waterproofing.

“Improper seal at the grade level creates an avenue for wind-driven rain, moisture, dirt, leaves, debris, and soil expansion,” Buttrey said. “Depending on what gets behind the waterproof membrane, if it’s not sealed properly, some products in that area perform better than others.”

Buttrey said waterproofing also suffers from products that are poorly designed, and from people who are not properly trained to install them.

The first is Blueskin WP 200, from Bakor, a self-adhering, composite membrane consisting of an SBS rubberized asphalt compound and integrally laminated to a blue, high-density, cross-laminated polyethylene film. The membrane is specifically designed to be self-adhered to a prepared substrate providing a high performance waterproofing barrier.

“The Blueskin is a 40-millimeter,” Buttrey said. “It’s easy installation. It can be applied 24 hours a day, 7 days a week, 365 days a year. I can install it with truck headlights in the winter. I just take a hair dryer and I can melt it right onto an ICF wall.”

Buttrey also likes the fact that the Blueskin effectively seals seams and will not leech chemicals into the groundwater it comes in contact with.

The second is the Resisto Foundation/ICF Waterproofing Membrane, a self-adhesive waterproofing membrane designed specifically for use with ICF foundations. Also 40 millimeters thick, the Resisto membrane is composed of SBS modified bitumen and a trilaminate-woven polyethylene facer. It can be applied directly to the polystyrene surface of an ICF without priming, but when priming is required, possibly because of dust from the work site, Resisto follows the pattern of others in the industry in recommending a water-based primer as opposed to a solvent-based primer, which would likely damage the polystyrene.

Stay Away from Solvents

One of the greatest dangers to ICFs is the application of chemicals that can compromise its integrity.

“They’ve got to make sure they avoid petroleum-based products,” said Ken Ritter, director of Southwick Inc., an Orlando-based ICF distribution and installation company.

Indeed, manufacturers, distributors and installers warn that any solvent-based product, will likely spell disaster for ICFs.

“The biggest issue is damage to the ICF,” says Tom Fallon of Beamsville, Ontario-based Cosella-Dörken. “Anything that could chemically react with the ICF – anything that can attack polystyrene – means you have to be careful. You’ve got to stay away from anything that’s solvenated.”

Water-based products, on the other hand, work fine with ICFs. Epro makes a top-quality, water-based ICF waterproofing membrane that can be applied with a spray gun or roller. Several other companies also offer ICF-compatible spray-on coatings, such as Ames Research Labs.

Dimple drainage boards are an integral part of any commercial ICF waterproofing solution. Platon, for example, is designed to easily bridge cracks of a quarter-inch. The double-dimple design is designed to reduce friction from settling soil, and is mechanically fastened to the wall.

“The worst thing that can happen is that [soil settlement] tears that membrane off the ICFs,” Gross said. “So it’s important to have a way to put the membrane up quickly, and have the assurance that it’s going to stay there.”

Cosella-Dörken’s Delta MS Clear is also popular for ICF foundations. It’s a translucent dimple sheet that bridges all seams and produces an air gap between the membrane and the wall. It’s translucent to allow the applicator to see attachment strips or grade marks for easier application, and available in rolls three to 10 feet high and 65 feet long.

Fallon said another product, Delta Drain, may be better for commercial applications. It’s a multi-layer geo-composite, combining a dimpled drain core with a heat-bonded geo-textile. The dimpled sheet will keep incoming water off of the waterproofing layer and act as protection during backfill operations. The geotextile will filter out soil particles and prevent clogging.

Similar dimple and dimple/gotextile composites are made by a number of companies, including Superseal, DMX, and American Wick Drain. 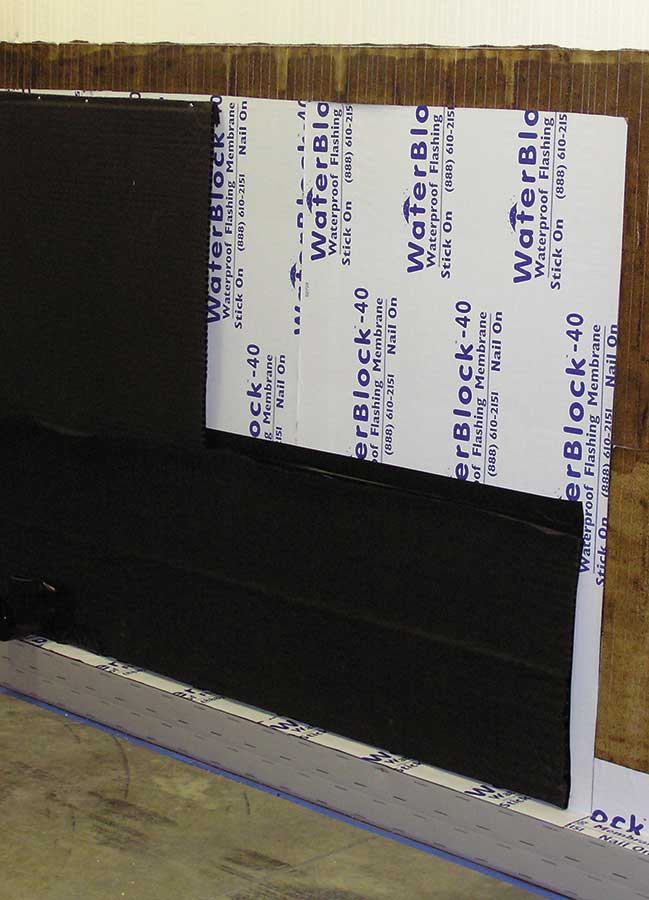 Once the water reaches the footer, a system needs to be in place to remove it from the building. Perforated pipe and gravel is the most common solution.

Form-a-Drain, a rectangular vinyl footing drain that also acts as a footing form, is another option. In 2006, CertainTeed introduced a commercial-grade, 10-inch version of the product, which Gross says is “trending nicely” in sales.

It’s not any one product,” Gross said. “It’s how the products work together to give you the ultimate in having an assurance that your basement will stay dry.

“Builders need to get the whole waterproofing system, and that is both keeping moisture away from the foundation walls and – anything that does get against the wall – providing a path to get down to the drain,” Gross said. “So if you’ve got both products in place, that’s the ultimate in protection and ensuring a dry basement and a dry foundation.”

According to Dave Polk, president of Wichita-based Epro, the most important thing to know about waterproofing an ICF job is that you only get one shot at it. Because cracks under the foam are essentially undetectable, water damage that results from them can travel considerable distances, and is, for all intents and purposes, unrepairable.

There is no remedial correction to it,” Polk said. “What you put on there, system-wise, had better work the first time. Unlike a concrete foundation wall where you can go in and correct it from the interior and solve the leak, you can’t do that with an ICF.” 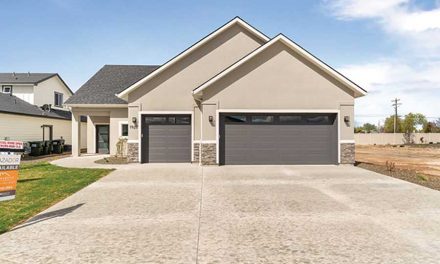