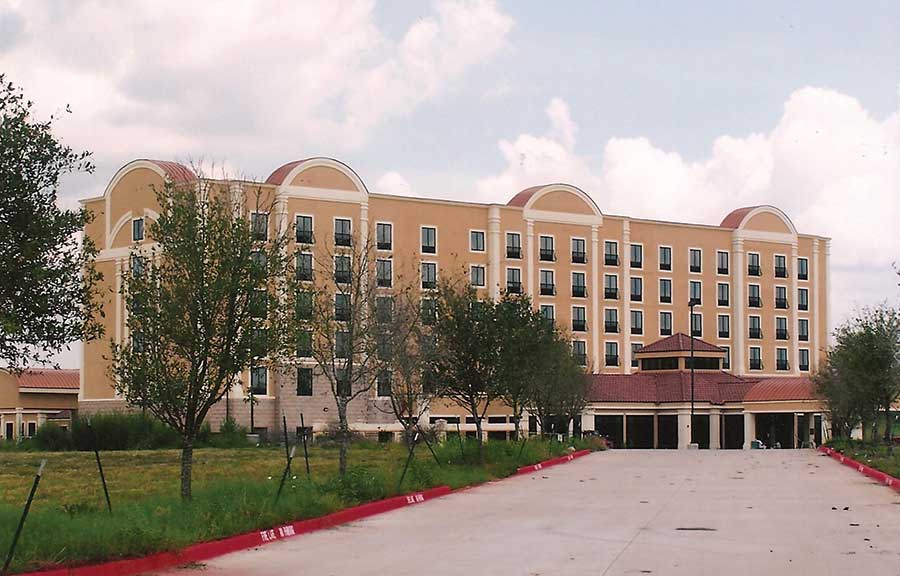 This demand couldn’t have come at a better time. Residential construction, which made up 80% of the ICF market in 2001, is suffering through its worst slump since the Great Depression. Excess inventory, credit restrictions, falling home prices, and other conditions have driven new housing starts down to less than half of what they were two years ago.

And while experts don’t expect overall commercial construction to maintain that rate of growth, commercial sector ICF construction could see exceptional expansion in the coming years.

Here’s why: Within the commercial sector, market forces such as high energy prices, government green building mandates, and natural disasters are creating demand for the type of buildings ICFs create easily. Virtually every sector of commercial, industrial & institutional (CII) construction is demanding high-performance buildings ICFs can deliver more quickly and cost-competitively than any other building method.

The market forces driving this growth show no sign of slowing down in the next few years.

Energy Prices: Energy prices remain near all-time highs. Crude oil prices, which averaged $25 a barrel five years ago, have skyrocketed into the triple digits. Prices peaked last June at $147, but are expected to remain well above $100 a barrel in the coming years. Other energy sources have experienced a similar price spike. The U.S. Department of Energy reports natural gas prices doubled between January 2004 and August 2008; electricity rates are rising another 10% in 2009.

ICFs can help reduce energy costs by 35% or more in the residential market. In large commercial structures, the total savings are even bigger.

Green Initiatives: The sustainable building movement has taken American by storm. Local, state, and federal agencies are offering incentives for “green” commercial construction, and in a few cases, it’s the only way to build.

For example, in Chamblee, Georgia, a suburb of Atlanta, all new construction more than 20,000 sq. ft has to be LEED-certified. Other municipalities across the country have similar mandates.

Nine federal government agencies, including the Army, Navy, Air Force, NASA, State Department, EPA, and Park Service, have committed to build only LEED-certified buildings. And private sector companies, including Fortune 500 companies such as Ford Motors and Bank of America, have also committed to the green building movement.

Durability: Katrina and Ike are part of a seemingly endless string of hurricanes battering the southeast. Tornadoes in the Midwest literally level towns every year. The scale and publicity of these disasters have prompted many to demand more durable construction methods. And once again, ICFs are a great option.

ICFs have a solid track record in nearly every sector of the commercial construction industry. Projects built over the last decade by creative architects and dedicated contractors have shown that ICFs can tackle, cost-effectively, nearly any type of commercial building, regardless of its height, size, budget, or time frame. We’ve covered many of these in past issues of this magazine.

Here’s a sector-by-sector look, arranged with the most promising sectors first:

The hospitality industry is a great fit for ICF construction. Needing the benefits of both energy efficiency and sound attenuation, any project involving lodging is a potential target
for ICFs.

Grand Caribbean Condos on the Alabama coast is another famous example. It survived two hurricanes with virtually no damage. (See story in the Oct ‘06 issue). Designer David Lindsey also formed the corbels, columns, and cornices out of IntegraSpec ICFs. 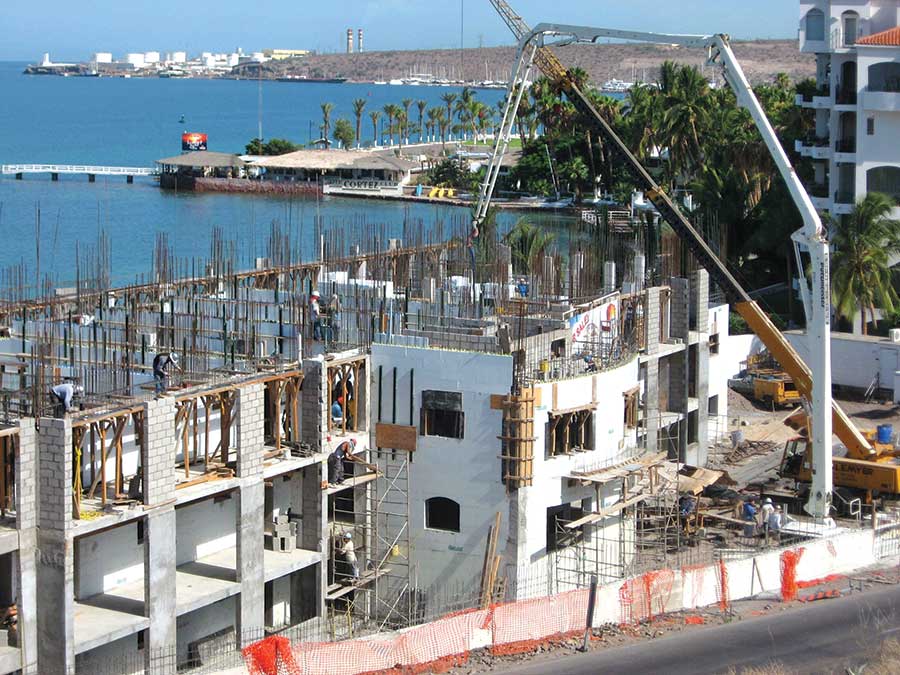 Past issues of this magazine have featured a dozen or more hospitality sector projects (including the project profile in this issue on page 24). Other examples include a retirement center in Canada (Conservatory Pond, Feb. ‘05), vacation resorts in New Hampshire and Missouri (Mountain Edge Resort, and Surrey Grand Crowne Feb. ‘08), a Hilton Hotel in Texas (Hilton Garden Inn, Apr. ‘08), a Comfort Inn in Georgia (Tifton Comfort Inn, Feb. ‘08), and a massive 230,000 sq. ft. apartment building in Nova Scotia (Residences at Mont Blanc, Oct. ‘07) to name a few.

The Waterside IV condos, a hospitality sector project near Ft. Myers, Fla., is the tallest ICF project to date. At 11 stories tall, they used Reward ICFs as non-structural infill walls. The project was the ICF industry’s first big “break” into high-rise construction (See story in Oct. ‘07).

Schools are perhaps the fastest-growing sector for ICFs. Clearview (Pennsylvania) Elementary School, completed in 2003, was the original “poster-child” of this segment. Built with ECO-Block ICFs, it achieved at LEED Gold rating, and saves the school district $18,000 annually in energy costs.

Alvaton Elementary in Kentucky is a more recent high-profile ICF school project. Built with Nudura ICFs and completed in 2006, it was the cover feature of the Feb. ‘08 issue of this magazine. Since then, the school district has mandated that all new buildings, including the new Joseph Warren High School and middle school, be built with ICFs. 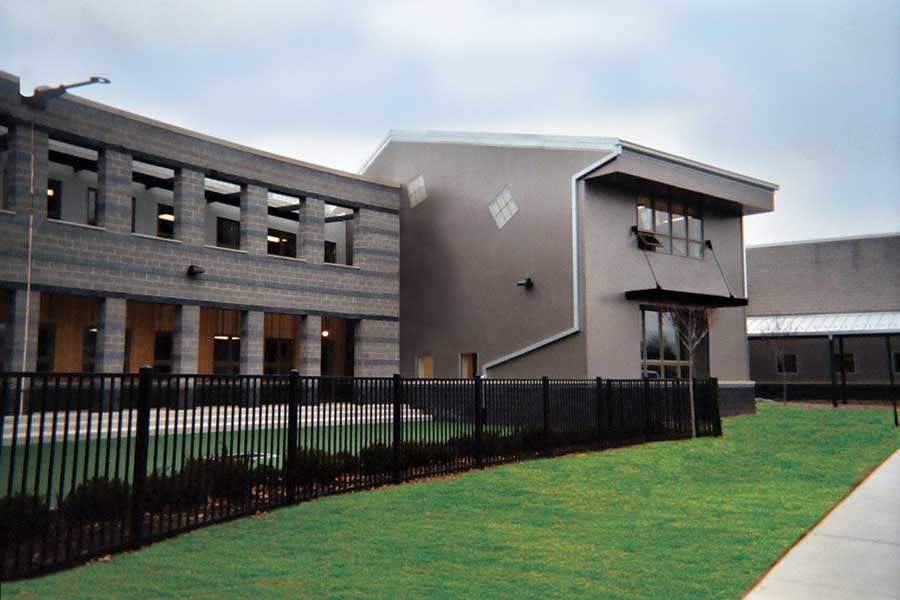 These projects are perhaps the best known ICF schools, but similar projects are popping up across the country. The ICFA has specifically targeted school construction with a pair of tech briefs and a booth at the AIA School Expo.

Theater owners are attracted to ICFs for a different reason than most: Sound attenuation. With an STC rating of 50 or higher, ICFs are faster, cheaper, and more effective than traditional soundproof walls.

The biggest ICF project in North America is a 20-screen, 210,000 sq. ft. theater complex in South Jordan, Utah. In addition to the exterior walls, all the interior walls are made of ICFs, some of which reach more than 50 feet tall. 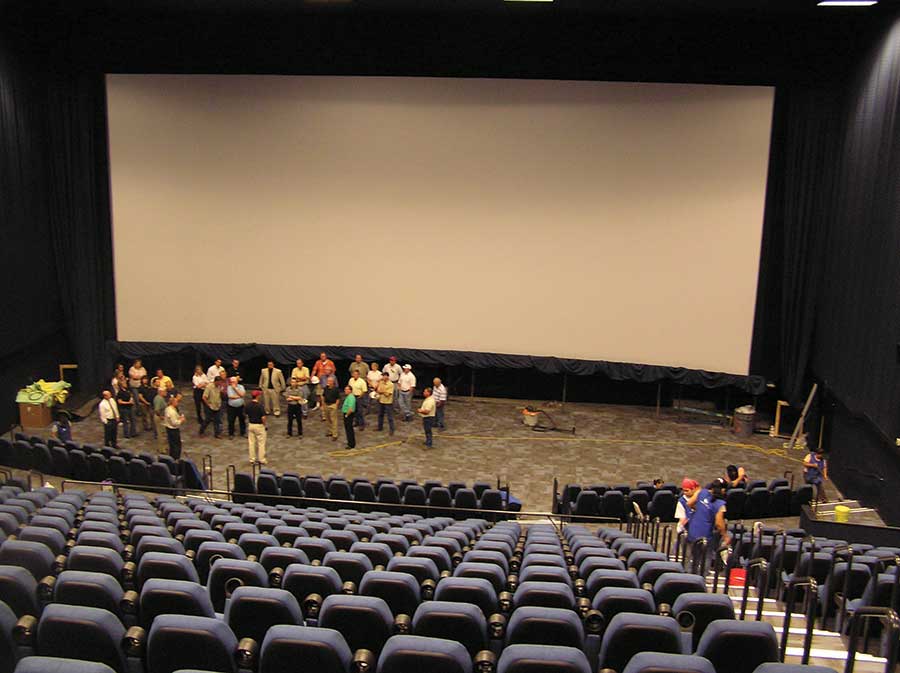 Built using Reward ICFs, the project used more than 35,000 blocks. IMS Masonry, which stacked and poured the walls, finished their portion of the job in 5 months.

Star Cinema IMAX Theater in Fitchburg, Wis., is another famous project in this category. ICF theater projects have been built in every region of the country and with a variety of ICF brands.

ICFs are gaining ground in the retail segment for the same reasons they’re popular in the hospitality industry:
They’re fast to construct, energy-efficient, and very low maintenance. They’re most popular for “big box” stores, where they’re used by K-mart, Home Depot, and several other national brands. 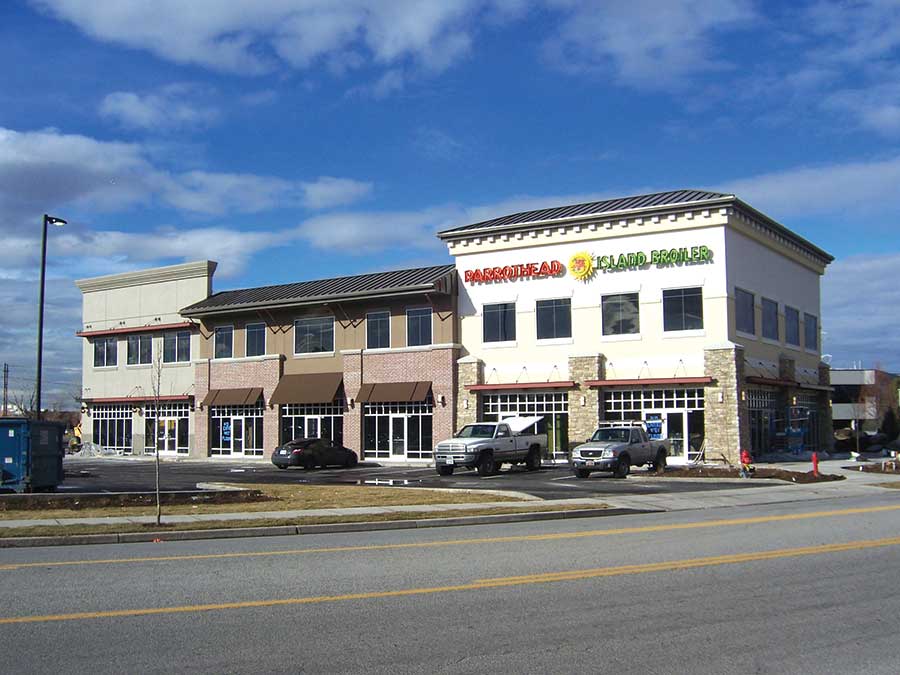 Restaurant chains and convenience stores also show significant growth, as franchises are seeking to build a
series of attractive, quality stores at an affordable price. The fact that ICF plans can be used anywhere on the continent is also attractive.

While church construction may not be an obvious niche for ICFs, they’re doing very well in this sector. Many church projects are built with volunteer labor, so easy-to-use ICFs have a considerable advantage (See Pinegrove Church, Feb. ‘08). The soaring arches and towering ceiling associated with religious architecture also favor ICFs (See Holy Cross Catholic Church, Aug. ‘07). 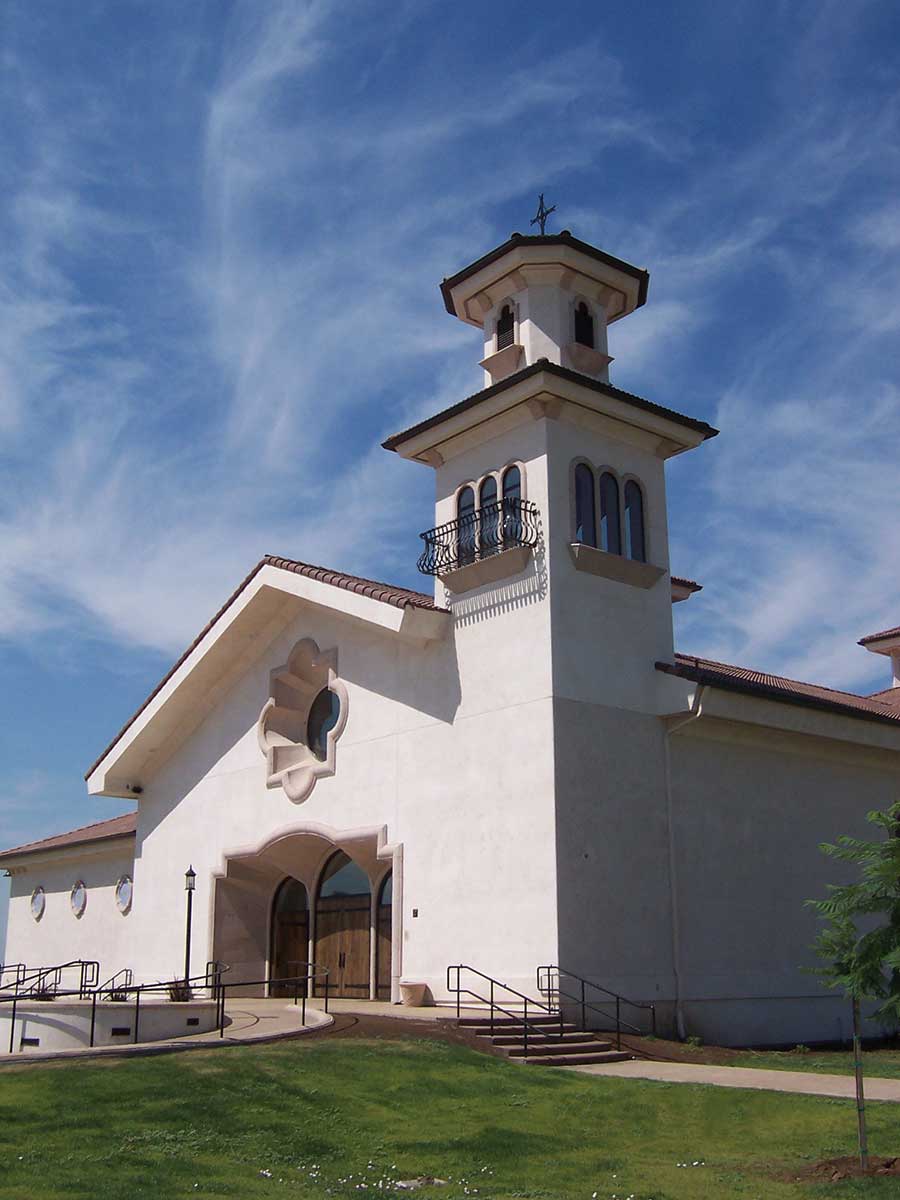 In addition to churches across the U.S. and Canada, ICFs have been used to build monasteries and youth retreats as well.

Encouraged by green mandates, city, state, and federal installations are quickly moving to ICFs. The Boulder County Parks and Recreation facility in Boulder, Colo. received significant publicity when it was completed (Aug. ‘07). ICFs are perfect for police and fire stations, too. The facility in Kalispell, Mont. received a 2007 ICF Builder Award (Feb. ‘08). Similar projects have been completed across the U.S. and in Canada. 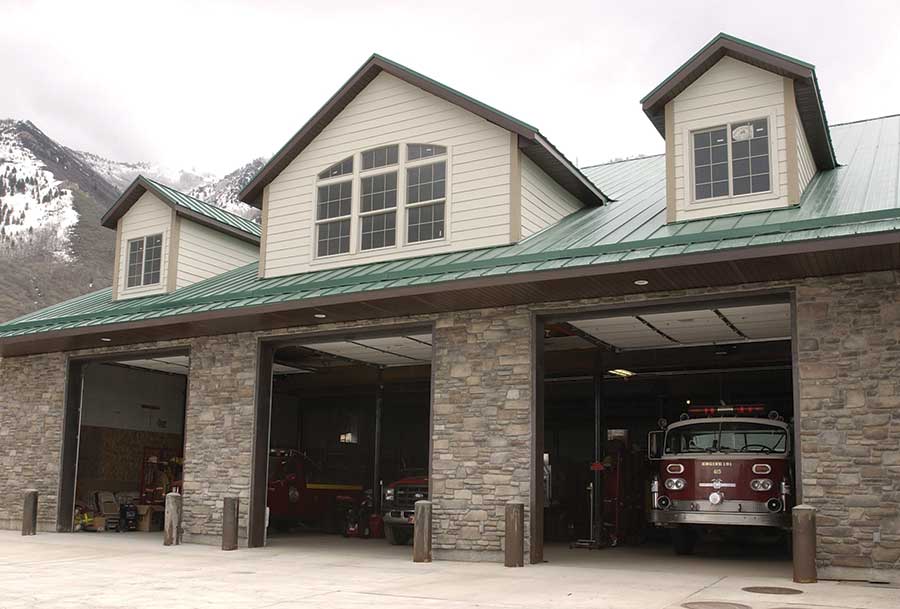 The Armed Forces Reserve Center in Pinellas Park, Fla. (Oct. ‘07) is a significant project, as it is the first large-scale military application of ICFs. Proven to be one of the most blast-resistant building methods available, the forms have been shipped to Afghanistan and Iraq to create solid, safe facilities for our troops. 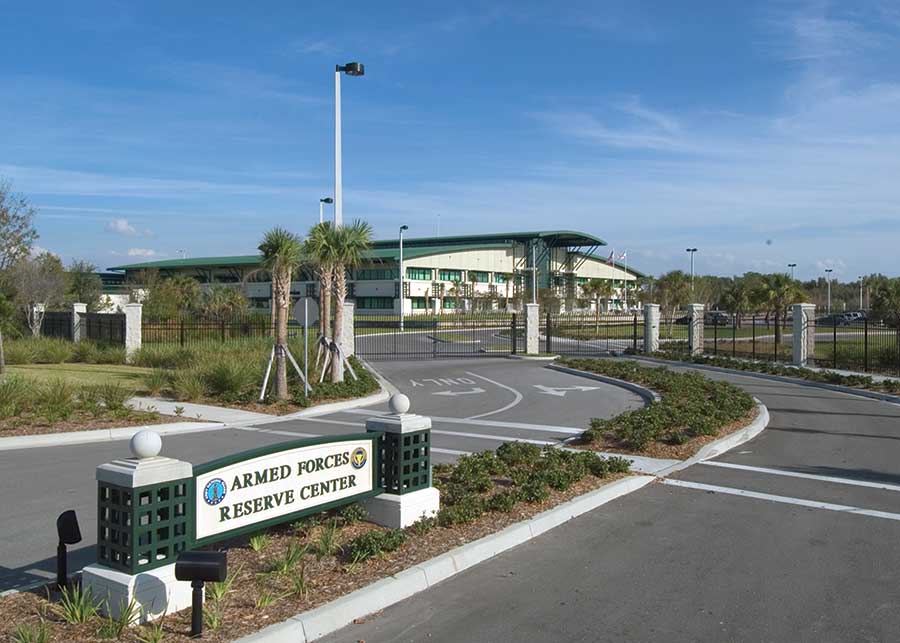 While this segment has considerable potential, growth is hampered by the maze of regulations and bureaucracy surrounding the bidding and contract award process.

After surveying the owners and architects on literally dozens of commercial projects with ICF wall systems, a few general principles become clear.

Second, green is in. If the bid team can convince the owner their solution is more sustainable, it usually translates to a significant advantage.

Third, the commercial sector is used to thinking long-term. If the building needs to last more than a generation, ICFs have a significant advantage. Energy and maintenance savings are especially attractive.

Fourth, ICFs are cost-comparable in the commercial sector. Building with ICFs will lead to long-term and short-term savings for the contractor and the owner.

Lastly, selling a new technology to owners and architects is hard work, and it usually is a process of months, not weeks. But the hard work is already done. ICFs have already penetrated every sector and subsector of commercial construction. Jails, hospitals, even mine shafts, have been built with ICFs. Outstanding projects in all these sectors exist. Find a good example, and arrange a tour for the project team.

The commercial sector is growing, and it’s filled with opportunities. Take advantage of it!