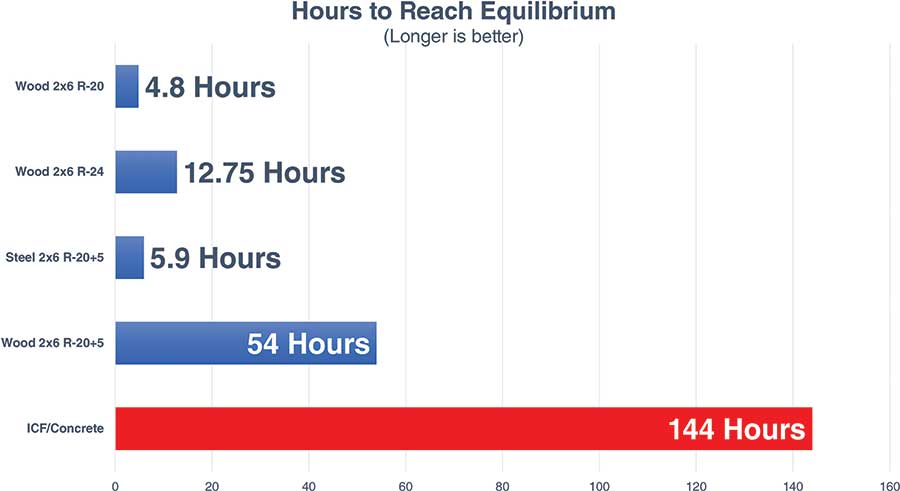 When the heat or A/C goes out, ICF homes will maintain steady room temperature far longer than any other wall assembly.

Insulated Concrete Forms (ICFs) are gaining popularity as a home building material, and as demand for high-performance homes increases, so does interest in ICFs.

They offer a host of benefits, such as lower energy bills, faster construction times, decreased maintenance and quieter interiors, but the primary reasons behind their growing popularity is their remarkable energy efficiency and strength.

There’s no need to compromise on aesthetics, either. Architects can design an ICF home to look just like a wood-frame house and still take advantage of all the added benefits of building with concrete. The floor plan can match virtually any style, and ICFs are compatible with all popular interior and exterior finishes.

The key to all of this is the remarkable combination of foam and concrete. Regardless of the brand of ICF chosen, all consist of two rigid EPS foam panels which sandwich a core of reinforced concrete. The concrete provides exceptional strength and thermal mass; the foam provides a continuous layer of high performance insulation, and doubles as an ideal substrate for many finishes. 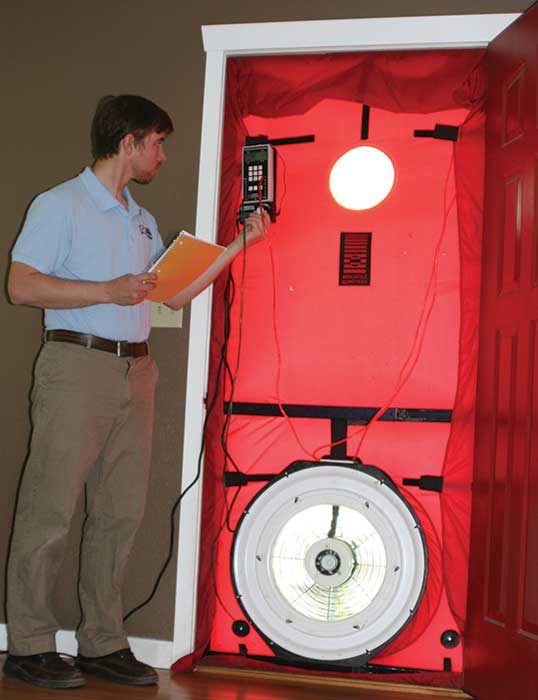 Efficiency experts use a blower-door test to determine how drafty a house is, measured in air changes per hour (ACH).

For many years, ICF experts talked about “performance R-Value.” These figures were impossible to verify, and the term has thankfully disappeared. But the concept remains true: The actual energy performance of an ICF wall far exceeds its nominal insulation value, both in the lab and in the real world. This is due to a combination of three factors: More insulation, less air infiltration, and high-mass walls.

Higher Rated, Continuous R-Values: The R in “R-Value” stands for resistance, and the higher the R-Value, the better the wall is at resisting the flow of heat.

EPS foam, from which ICFs are made from, is one of the best insulating materials yet invented. Imagine a disposable foam cup, where 1/8 inch of EPS foam is all it takes to comfortably separate your hand from a scalding drink. ICFs typically have five inches of EPS insulation with tested insulation value of R-22 or R-26. Some ICF manufacturers offer even thicker sidewalls, with tested values of R-32 or even R-40.

Additionally, that insulation is continuous. With frame construction, the average frame wall is 25% wood, so even though the fiberglass or cellulose may be rated at R-13 (for 2×4) or R-19 (for 2×6), the “whole wall” insulation value is significantly less.

Finally, with ICFs, the owner is assured of continuous insulation without gaps or installation mistakes.

Airtight Construction: R-Values don’t accurately reflect real-world conditions, partially because lab tests don’t consider issues such as the level of airflow through the wall. Anyone who has lived in a drafty house when a winter storm howls outside knows how significantly air infiltration affects heating bills.

Efficiency experts use a blower-door test to determine air changes per hour. A modern, well-built house with homewrap and caulking typically tests about three to six ACH. ICF homes typically test at less than 0.5 ACH. Even hurricane-force winds can’t force their way through the four to six inches of solid concrete.

Thermal Mass: Many historic buildings in the American Southwest have pleasantly cool interiors even when the hot summer sun has been beating down on them for hours. The secret is in their adobe walls—usually several feet thick—that take hours to heat up. And when the sun sets and temperatures drop, the stored-up heat keeps the interior pleasant through much of the night. This phenomena, called thermal lag or temperature damping, is due to the mass of the walls. 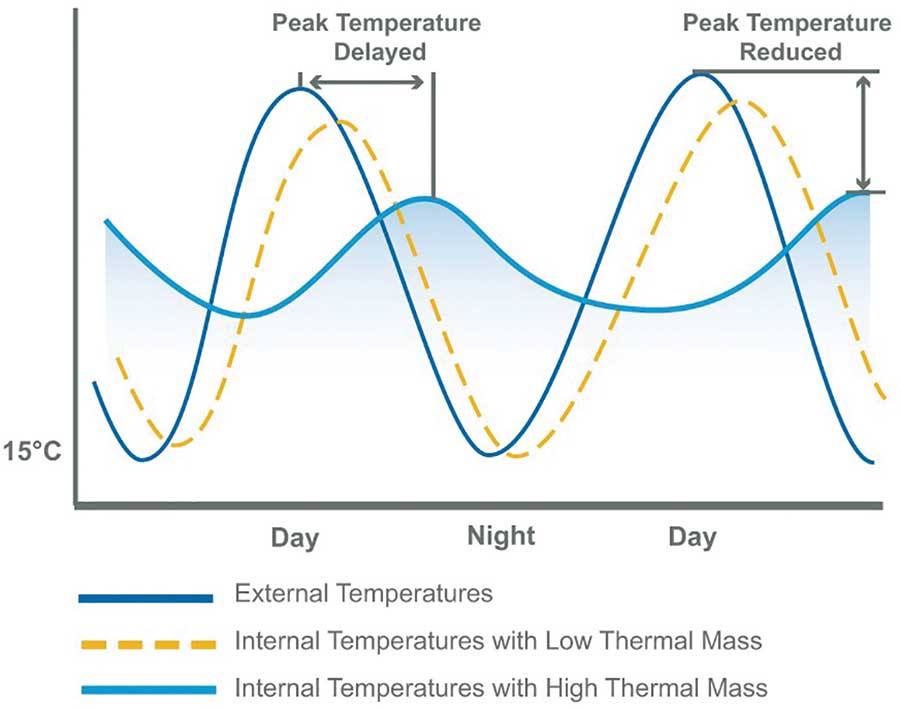 Heavy walls take hours to heat up during the day. Then the stored-up heat keeps the interior pleasant when temperatures drop at night.

In simple terms, ICF construction generally cuts energy bills in half. If additional steps are taken, such as adequate attic insulation, quality windows and doors, and a properly-sized high-efficiency HVAC system, the savings could be even more.

ICF homes offer a level of safety no other building system can match. They are more than 10 times stronger than framed structures, and several times stronger than CMU  “cinder block” construction as well. It’s a natural result of having exterior walls with a core of solid, steel-reinforced concrete. 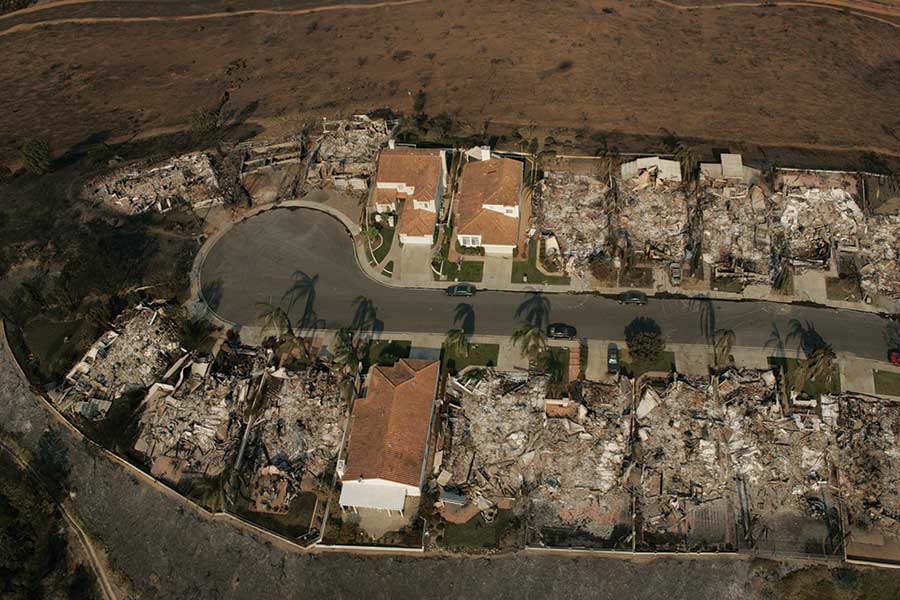 These three ICF homes in San Bernardino were the only survivors in the neighborhood after a devastating 2007 wildfire.

A few years ago, the insurance industry set up a program to encourage homeowners to build more durably. The Fortified…For Safer Living program specifically encourages ICF use. In some areas of the country, insurance companies will give discounts for “Fortified” homes, or for ICF homes in general.

As one might suspect, building a disaster-resistant home requires more than just ICF walls. Impact-resistant windows, metal storm shutters on all openings, and a disaster-proof roof are all popular upgrades for homeowners concerned about safety.

Still, many experts believe ICFs are the most cost-effective—and aesthetically pleasing—way to protect occupants and their belongings from natural disasters.

When a raging wildfire swept through the suburbs of San Diego in the fall of 2007, it forced more than half a million people from their homes and destroyed more than 2,000 residences. On one suburban street in San Bernardino, every home on the block was burned to the ground, with the exception of three ICF homes, which a newspaper photographer captured standing virtually unscathed amid the charred wreckage surrounding it.

Contrary to popular belief, the foam used in ICFs will not burn. It will melt if exposed to high heat, but it will not contribute any fuel to the fire. In fact, it is virtually “self-extinguishing,” thanks to a flame retardant all of the leading ICF manufacturers add to the EPS foam. 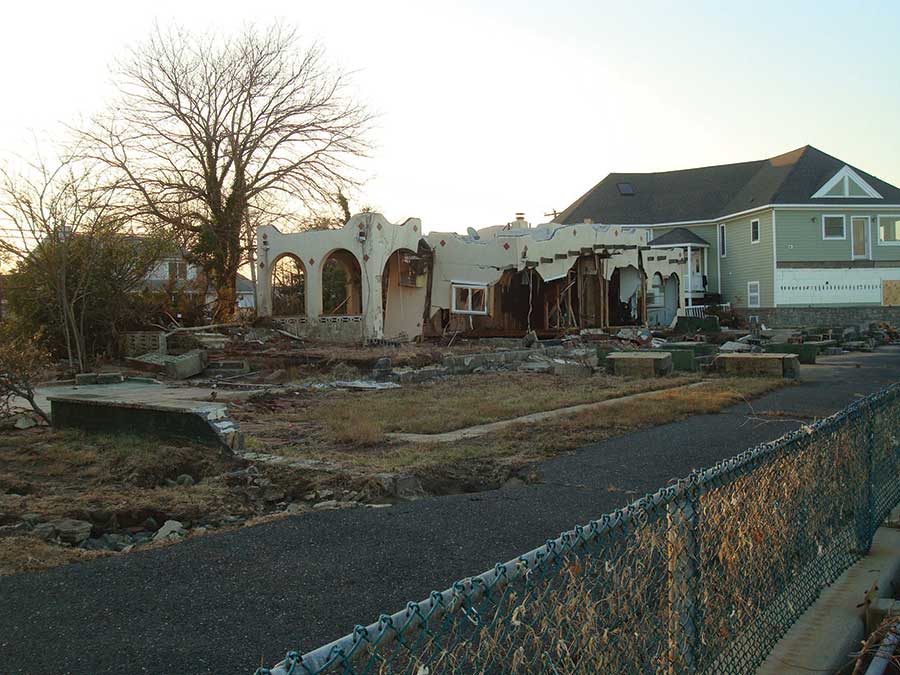 This beachfront home in New Jersey withstood Superstorm Sandy when those around it were reduced to rubble.

Other notable examples of ICF homes that have withstood disaster include a beachfront home in New Jersey that withstood Superstorm Sandy, despite having it’s siding scrubbed off by the pounding waves, and a Gulf Coast ICF house that withstood a 20-foot storm surge generated by Hurricane Katrina that swept the rest of the neighborhood down to bare foundations.

A few years ago, 75 ICF homeowners were surveyed about the features they appreciated most in their ICF homes. It’s no surprise that energy efficiency and disaster resistance topped the list. But benefits numbers three and four were comfort and quiet.

In fact, more than 60% of ICF homeowners mentioned the quietness of their homes, versus only 2% of their wood frame counterparts. This is due, once again, to the sound absorbing qualities of EPS foam.

Pieter Vanderwerf, who conducted the study, said, “Many homeowners said their biggest surprise in moving into an ICF house was the noise difference… The ICF owners told two common stories over and over again: ‘I looked out the window and saw the traffic on the road, but I couldn’t hear it.’ And ‘While talking with my neighbor one morning, he asked if the thunderstorm the night before woke me up, too. But until that moment I never even realized we’d had one.’”

Most ICFs with a six-inch concrete core have STC ratings of 50 to 55, which means only about one-quarter to one-eighth as much sound penetrates an ICF wall when compared to wood frame.

This has become a major selling point in the commercial sector. Developers are using ICF to eliminate sound transmission between theaters in multiplex cinemas and between units in apartment buildings.

As already noted, insulated concrete form construction can be adapted to virtually any residential or commercial project.

Adapting a plan for ICFs typically starts with stretching the exterior walls outward a few inches to accommodate the thicker walls. Other architectural flourishes are actually easier with ICF. Long clear spans can be easily accommodated, because the walls can carry the loads and steel beams these designs require. Windows can be made larger in seismic zones, and winter construction becomes possible in northern regions.

While ICF walls look dramatically different from plywood-sheathed frame construction, they’re actually easier to work with for most exterior finishes. The foam substrate is perfect for cement-based stucco or textured acrylic finishes. Brick, stone, and manufactured stone are also applied more easily to ICFs than frame, as no additional vapor barrier is needed (in most regions). Siding—vinyl, wood or cement board— are also popular. It’s as easy as fastening the material to the ICF furring strips, clearly marked on the outside of the forms.

In most areas of the country, the cost of ICF construction is only slightly more expensive than wood; nationally, an ICF home is estimated to cost 3% to 5% more than wood frame to build. That’s about $10,000 more for a $250,000 house. Financed with a conventional 30-year loan at 5%, that amounts to an additional $55 on the monthly mortgage. However, because the homeowner will be saving at least that much on energy bills, the actual monthly cash outlay is less. In other words, the monthly cost of  “mortgage plus utilities” is actually less in an ICF house.

All of the other benefits—like disaster-proof walls, quiet interiors, and less maintenance—are added bonuses at no extra cost. 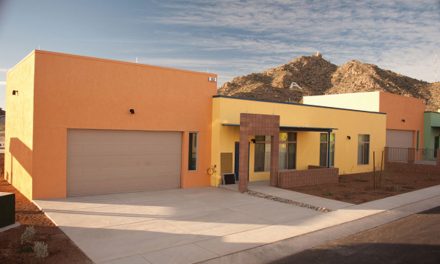 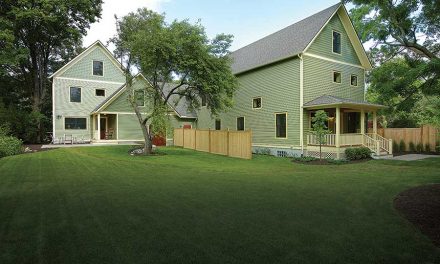