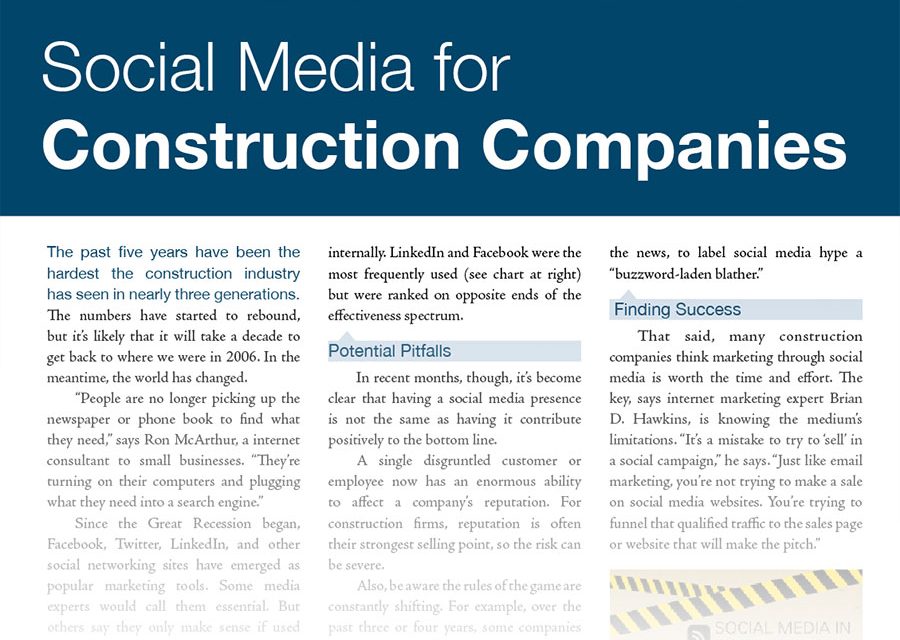 The past five years have been the hardest the construction industry has seen in nearly three generations. The numbers have started to rebound, but it’s likely that it will take a decade to get back to where we were in 2006. In the meantime, the world has changed.

“People are no longer picking up the newspaper or phone book to find what they need,” says Ron McArthur, a internet consultant to small businesses. “They’re turning on their computers and plugging what they need into a search engine.”

Since the Great Recession began, Facebook, Twitter, LinkedIn, and other social networking sites have emerged as popular marketing tools. Some media experts would call them essential. But others say they only make sense if used correctly.

It’s Everywhere
At the end of 2012, LinkedIn had 161 million members, with an average of two new members per second. Facebook has more than a billion users, with 3.2 billion likes or comments posted daily. On YouTube, users upload 24 hours of video content every minute. Twitter, Google Plus, Pinterest, and other social media sites have hundreds of millions of visitors every day.

It’s obvious that with that big of an audience, media gurus are advocating making social media part of an “integrated marketing effort,” along with print ads, trade show space, a website, blog, and e-newsletter.

And the construction industry has bought the hype. According to a survey taken by the Construction Marketing Association in November 2012, 90% of construction companies already use social media. Nine out of ten manage the effort internally. LinkedIn and Facebook were the most frequently used (see chart at right) but were ranked on opposite ends of the effectiveness spectrum.

Potential Pitfalls
In recent months, though, it’s become clear that having a social media presence is not the same as having it contribute positively to the bottom line.

A single disgruntled customer or employee now has an enormous ability to affect a company’s reputation. For construction firms, reputation is often their strongest selling point, so the risk can be severe.

Also, be aware the rules of the game are constantly shifting. For example, over the past three or four years, some companies have spent significant sums of money trying to rack up as many Facebook fans as humanly possible, asking friends to “like” a page to participate in a raffle, read exclusive content, and so forth. Imagine their dismay when, in October 2012, Facebook quietly changed their algorithms so business “status updates” would only reach a random 10% of their audience. (Coca-Cola has 55 million Facebook fans and does a great job providing them with a stream of content. But, PageLever reports Coke “will be lucky to reach 6% of those fans with its status updates. If it wants to reach the other 94% or so, then it has to pay.”)

Finding Success
That said, many construction companies think marketing through social media is worth the time and effort. The key, says internet marketing expert Brian D. Hawkins, is knowing the medium’s limitations. “It’s a mistake to try to ‘sell’ in a social campaign,” he says. “Just like email marketing, you’re not trying to make a sale on social media websites. You’re trying to funnel that qualified traffic to the sales page or website that will make the pitch.”

McArthur agrees, “Don’t use your social media profiles as a way to blatantly advertise. Instead, use them as a way to get to know the people you serve so you can build relationships and customize your offerings to their needs.”

Wasserman is even more blunt. He says, “Here’s the secret to good social media marketing: Make good products and offer good services. You can’t trick people into “liking” your brand. …Make products and offer services that are really, really good. That’s not to say you should completely forsake social media marketing communication. Every once in a while if you have something interesting to say, then by all means use Twitter or Facebook to say it. But stop posting cute pictures of puppies to win cheap Likes.”

The goal with social media is to show potential customers that you are knowledgeable and professional, and to increase the likelihood that they will think of your business when they’re ready.

With this modest definition of success, the construction marketing survey cited above reports good results. Almost 70% of respondents reported that social media campaigns had increased brand awareness, and 65% saw an increase in website traffic.

Getting Started
Small businesses typically don’t have the resources to have a presence on every social media platform. If your business deals primarily with other businesses, LinkedIn is probably the place to start. If the customer base is the general public, Facebook and Twitter may be a better fit. It may also be beneficial to monitor what customers are saying about you on business listing sites such as Citysearch, Yelp, and Angie’s List.

In setting up a profile, keep your online personal and business lives separate. “If you already have a personal Facebook page that you use to keep up with friends and family, keep it personal,” says Heather Lutze. “Build a new Facebook profile as CEO and founder of XYZ company.” She recommends using your title in the name of the business persona account and the company name and a few select keywords for the fan page.

“Mixing your personal and business pages is discrediting and unprofessional,” she says. “It’s perfectly fine to have two profiles on Facebook.”

Once the site is up and running, encourage customers and clients to join. Your potential customers want to know they’re doing business with a real person, but be wise in what you post. Venting about a horrible experience with a customer or sharing aspects of your personal life will not encourage customers’ trust and appreciation.

Stay up-to-date with the content. Anything that happens with the business—new products and services, trade shows you’re attending, bids won, updates on major projects, pictures of an outstanding job—should be posted. Basically, anything the customer base should know about.

“If you want your social media presence to be effective, you will have to keep up with your profiles, blogs, and other social media outlets with current content that is updated often,” says Lutze.

Most businesses find that they need to hire a marketing assistant at least part-time to manage social media. McArthur says, “If you ignore your customers when they offer positive feedback on your updates (i.e. “Like”, retweets, etc.), you’re essentially rejecting their efforts to interact with you and your business. Social media can only be effective if you use it and use it often.”

The internet is a vital tool for business, and if used properly, the immediacy of this medium can work to your advantage in ensuring your business success for years to come.

But it requires work. Alaniz warns, “A badly managed presence may be worse than none at all.” 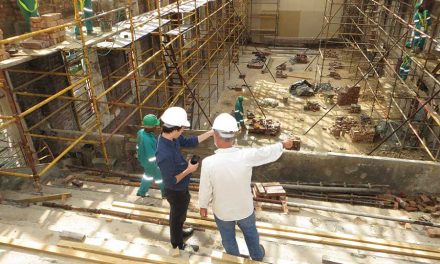