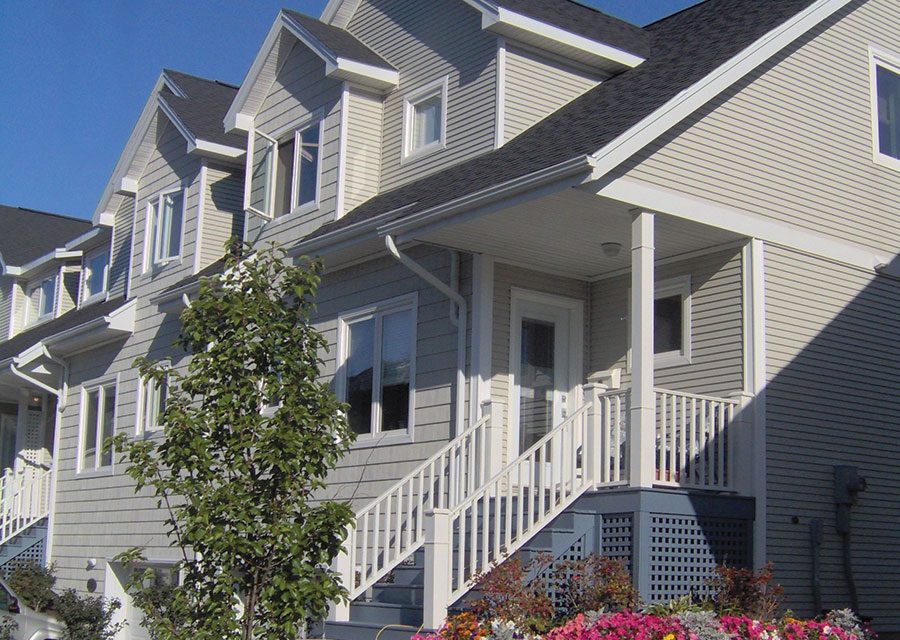 The Villas at Mt. Blanc, a 41 townhome development in Halifax, Nova Scotia, built with ICFs from the foundation to the gable tops. Completed in 2005, it won “Best ICF Development” at the 2005
ICF Builder Awards.

Large developments are the Holy Grail of residential ICF projects. Longtime concrete promoter Rolland Johns once said, “It’s hard to generate a whole lot of excitement concerning the business potential associated with concrete homes when only one home is constructed here or there. But, when entire concrete home developments begin to appear, then suddenly those same business people begin to take notice and become excited about the potential for the industry.” For ICF builders and distributors, a housing development carries the allure of selling the job once, then collecting revenue on house after house after house. 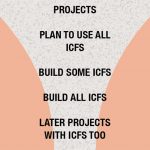 But do we know what it takes to make a successful ICF development? Despite their importance, there is very little knowledge about how large projects have fared and what separates the hits from the misses. In 1999 alone, the ICF press announced at least five major projects that were in planning, from a development of 30 luxury homes near Dallas to a planned retirement community near Green Bay, WI with 256 duplex units. But in the years that followed, that same press only gave detailed follow-up information on one of them, an upscale golf community near Reno, Nevada.

Two years ago at Building Works we set out to study the track record of ICF developments systematically. We hoped that this work would reveal some useful lessons for future developments. We were right.

The Portland Cement Association polled concrete promoters to assemble a list of ICF developments in 2003. From this list we identified 12 developments that: 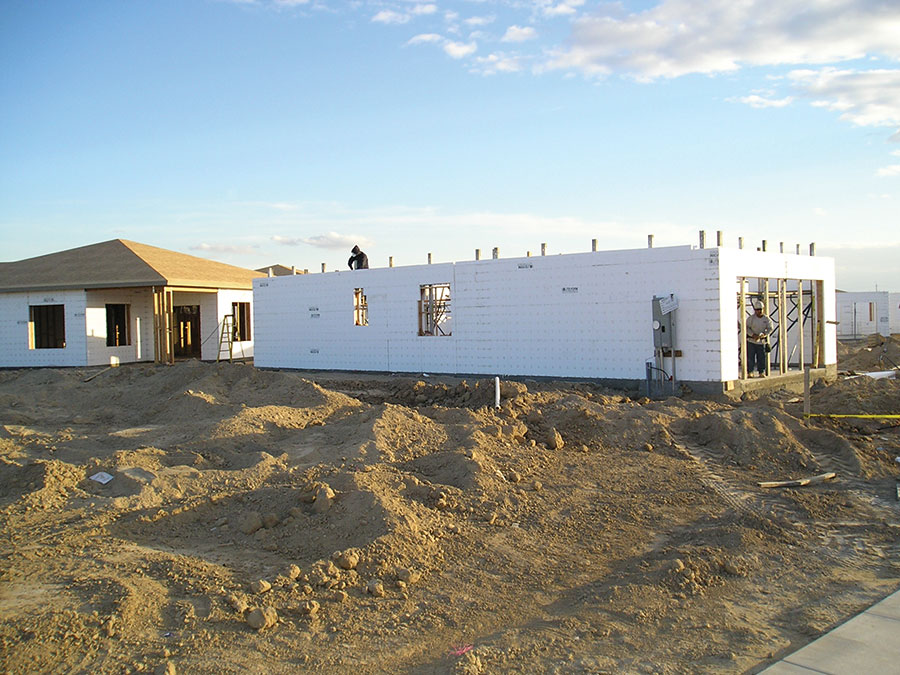 The Raintree Development in Lubbock, Texas, incorporated all ICF basements.

We located key participants in each project with first-hand knowledge of its history. We interviewed them at length to learn how the project went and whether the developers, builders, and buyers viewed each project as a success. The results were quite different from what we expected.

The figure below summarizes what happened to the developments in our sample.

We discovered that two of twelve projects were actually not designed to be fully ICF developments. The reports were simply wrong. According to the principals, the plans called for only below-grade walls or only a few of the housing units to be built with ICFs.

Two other developments that were actually planned to be all-ICF never got off the ground. The project was abandoned before any construction work was performed or any materials purchased.

Two more were planned to have ICF houses, but the developers went bankrupt early in construction, so a fraction of the planned units were actually built.

Still another two projects were initially built with all ICF units, but nonetheless switched to wood at some point later during the project.

In three cases the developers completed the project with all ICFs. However, they did not build any more ICF developments after that, so far as we could determine. 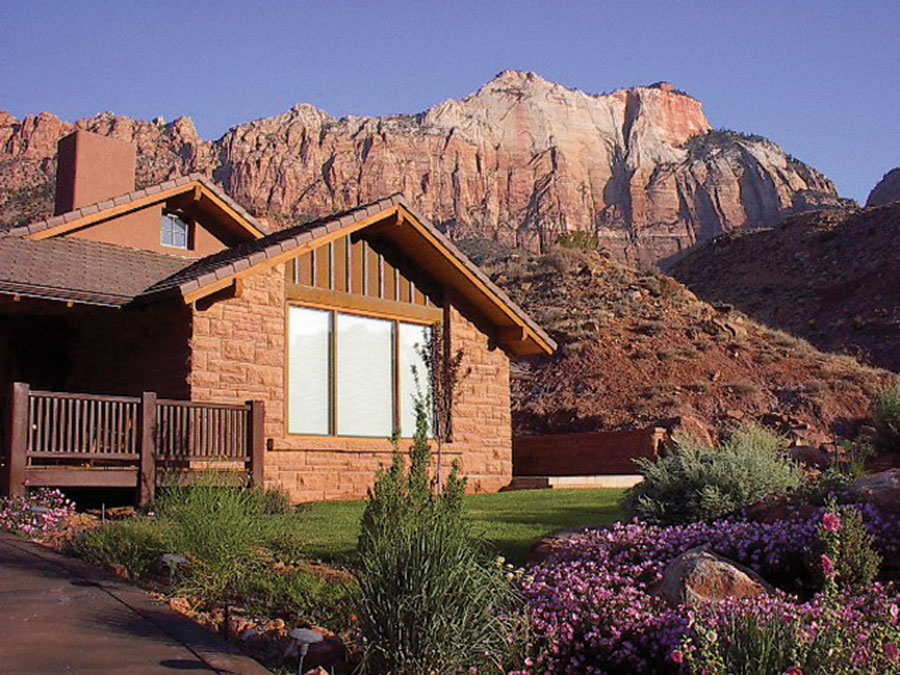 The Gifford Park Development in Springdale, Utah used ICFs throughout as part of an uncompromising green and quality theme.

In one case, the developer completed the project with all ICFs and built a later development with ICFs as well.

We summarize these findings with the “Project Funnel”, depicted in the figure above. It shows graphically the idea that there are forces along the entire planning and construction process that can limit the amount of ICFs used, even when the initial plan was to make the development all ICFs. Many ICF projects “drop out” along the way, and only a few get to the original goal of a complete ICF development and a developer who goes on to do many more.

Some planned “ICF developments” only use the product in a limited way. Some design it for major use but fail financially before completion. Others reach completion but revert to conventional construction along the way. A few remain all-ICF but for some reason did not inspire their backers to do more such projects later.

The forces that limit ICF use appear to be quite different at different stages of a project’s planning and operations.

It is hard to find any problem with the developments that were planned to use ICFs in a limited way. Craig Wallace Jr., developer of the 17-unit Raintree townhome complex in Lubbock, Texas, said, “We did all the basements out of ICFs and they worked well. We couldn’t make them pay for the above-grade walls at the time due to the very low cost of lumber. I think ICF construction is the best product since sliced bread. We do all commercial now, and we’ve done 17 buildings since then with ICF construction. Our current office and new facility is built out of ICF which demonstrates my confidence in the product.”

Others who planned limited use of ICFs were favorable to the product and used it where they felt it made sense. Arguably, this kind of experimentation with the product is important for developing the market even if it does not maximize the use of ICFs in the first project. We assume that industry promoters announced them as “all-ICF” projects because of crossed signals or because excitement led people to make incorrect assumptions.

There is limited outside information about the developments that never got beyond planning. We could locate few of the principals, most of whom have moved on. The observers we talked to suggested that the plans announced were very preliminary. They were not well worked out, financing was not in place, and the backers eventually abandoned the project because investment was not found or it began to look less attractive on more detailed review.

The projects that went bankrupt appear to have been the work of inexperienced developers with questionable practices. Sam Gallego, the California cement industry promoter that assisted on a large California project that went bust, said that the backers “were taking money out of this development to pay for others.” In the case of the other bankrupted project, the developers were “just poor money managers.”

The two developments that switched from ICFs to frame did so because of a combination of a change in personnel and cost concerns. Norman Williams led a development of 150 lots in Texas. “I owned the land and intended to build it out myself. But eventually I needed to take an equity partner and we sold off some lots to other builders. They were supposed to use ICFs, too, but demand was a bit slow in the area and our units were taking longer to sell because of their higher price. The investor and the builders all objected to the ICF requirement, so after a while all the houses being built were wood.”

In a 16-home project in North Carolina, designer/builder Chris Yerkes noted that “People really liked the development, but cost was a little higher and the units moved slowly. Eventually another group bought out the owners. They did some more ICFs but ended up doing the last couple with wood, probably for cost reasons.” Yerkes sensed some unhappiness from the initial owners that the method of construction was changed in the tight-knit development.

The developers that did complete ICF developments but did not do more later cited similar issues. Jim Smrt of Lakecrest Homes is the primary builder in the ICF developments within the Montreux community in Nevada. He says, “It has worked out well, but it has been frustrating because our costs have been higher yet we aren’t getting compensated for the value of the homes. Buyers are only willing to pay the same price per square foot as they are paying for the frame houses down the street. Essentially we tried charging more and had to discount. We’ve tried marketing and promoting and people still couldn’t appreciate it.” Lakecrest has gone on to build individual homes with ICFs, but no more complete developments.

In contrast, Allan Staker of Utah has not considered switching to building with a wall system other than ICFs. He has firmly adhered to ICF walls in his Gifford Park development of 15 luxury single-family homes adjacent to Zion National Park in Springdale, Utah. He credits the wall system with helping keep heating and cooling costs extremely low. Most of his relatively wealthy and educated customers, who are mostly urban dwellers buying a vacation home, understand and appreciate the system.

It is almost a cliché that the higher cost of ICF construction inhibits its use in homes. However, in the developments studied we can clearly see how cost prevented many planned ICF developments from reaching completion, and prevented their owners from pursuing further developments with ICFs.

A custom ICF house has a ready buyer who has agreed to and approved ICF construction at the outset. Most often, the custom buyer even requested it. For a single speculative ICF home, it is little risk to find a buyer who values ICFs enough to pay a slightly higher price.

But consider a development of, say, 50 ICF houses. The seller may try to price them at a premium to cover the higher cost. But it may take a while for 50 buyers to happen along who appreciate the value. This leaves the developer to sell the units slowly and incur higher finance costs, or cut price to match competing frame construction. In either case, the seller has lower profits than he would have had if he had used frame. Our interviewees claimed that their construction costs averaged about $10,000 per unit more with ICFs than what they probably would have been with frame. At that rate, a 50-unit ICF development that had to price the same as frame would realize reduced profits of a half million dollars.

Yet one developer has gone on to do additional ICF developments, and others claim they had a positive experience and may do more large residential projects in the future.

The most successful projects appear to have had three elements:

Pieter VanderWerf is President of Building Works, Inc., a consulting company that helps companies with new construction products. He can be reached at pvander@buildingworks.com, and his company at www.buildingworks.com. 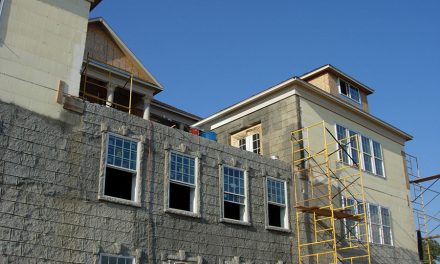 Panel vs. Block: Advantages and Drawbacks