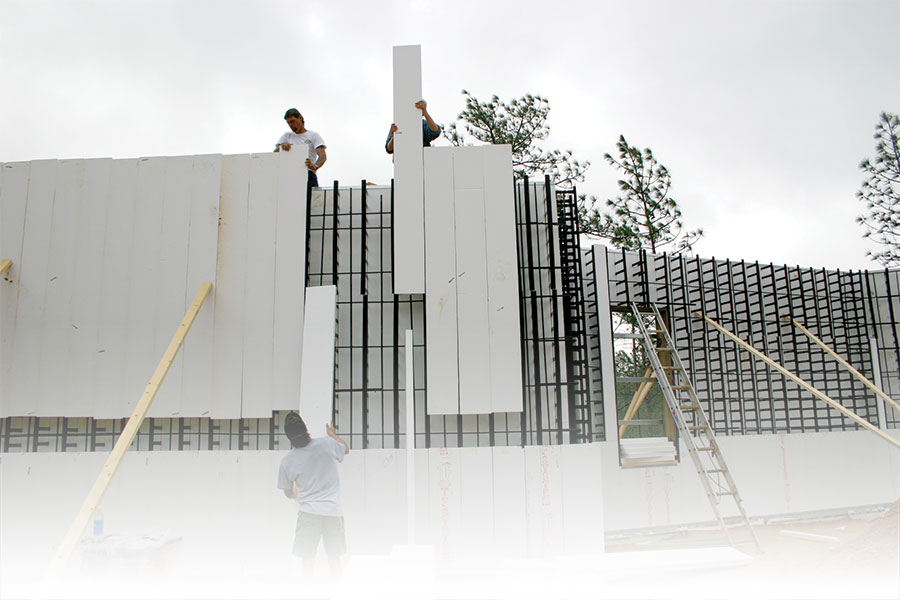 This style of ICF eliminates form compression and float, reduces bracing requirements, and may make it easier for concrete contractors to transition to foam forming.

In recent years, a new style of ICF has been steadily gaining popularity. While the majority of insulated concrete
forms are intended to be stacked in horizontal courses, these “vertical ICFs” are installed as upright planks. The Partnership for Advancing Technology in Housing (PATH), a division of the U.S. Dept. of Housing and Urban Development, has named vertical ICFs as one of the top 10 most promising technologies.

Joseph Farella, sales manager for vertical ICF Hobbs Building Systems, explains, “The evolution of ICF design appears to be going the same way that removable forms have. Back in the beginning, everyone was building with blocks—either brick or CMU. Then they began using poured-in-place concrete for foundations, but were setting their forms horizontally. Finally, they figured out it was faster and easier to set them vertically, and that’s still how they do it today. I believe stay-in-place forming is following the same pattern.”

The first vertical ICF was invented by Jerry Spude in the mid-1990s. His business partner, Don Rudolf of TF System, explains, “We were both concrete contractors, and we’d developed an ICF, installed as horizontal planks. So we had a system, but it wasn’t outstanding; we were constantly dealing with settlement and float. One day about 1996, a light bulb went on, and we thought, why don’t we use these vertically?” 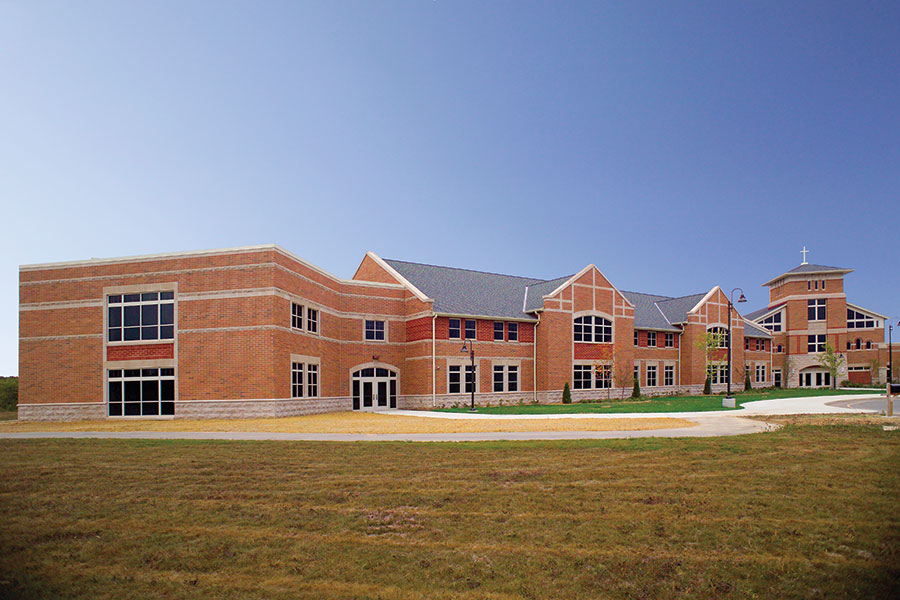 As suspected, the vertical orientation eliminated settlement and float. It also solved a number of other problems. In fact, Rudolph and Spude were so pleased with the results that they re-engineered their product exclusively for vertical installation. A few years later, they revised the company name to “TF System, the Vertical ICF.”

“We deliver a higher quality project, completed easier and faster,” Rudolph claims. While there are significant differences between vertical ICF designs on the market, there are many similarities.

As already mentioned, vertical ICFs eliminate form float and settling. This means contractors and installers don’t have to deal with the time, labor and expense of gluing, taping, wiring or tying forms together.

Hobbs, TF, and HercuWall can deliver their forms and ties to the jobsite in any height desired. Custom wall heights can be set quickly and accurately, without having to cut the top row of blocks to some odd dimension. This also reduces waste.

Rudolph claims that the forms are safer, as well. “Vertical ICFs can be assembled while standing on the ground or floor level,” he says. “There’s no climbing up and down ladders or scaffolding to install blocks or ties.”

In fact, Hobbs and TF claim their forms need significantly less bracing than traditional ICFs. “Instead of going every 4 to 6 feet on center, you can set your bracing up to eight to ten feet apart with OSHA-approved planking and bracing” says Andrew Hobbs, president of Hobbs Building System. “Our system has a waler on the top to keep the forms straight, so you can get by with half the bracing or less.”

Rudolph at TF affirms that, other than at the corners, wall bracing is primarily “wind bracing” until the forms are in place. “You could theoretically go further than that, but you need to be able to get up there to pour the wall,” he says. (For spans further than six feet, be sure the planking meets OSHA guidelines. A link to their load calculator is available on the
icfmag.com website.)

Hobbs adds that vertical ICF designs are more attractive to first-time ICF installers. “We’re similar to conventional concrete forming methods,” he explains. “Concrete guys understand vertical forming because that’s how they do their removable forms. There’s a more natural transition from removable concrete forms [RCF] to vertical designs because of the similarities.

Tall walls with heights above 20 or 25 feet are set in steps. Rudolph, at TF System, explains, “Tall walls are fairly easy to build using a technique we call stitching. For example, on a 24-foot wall, you’d use two 12- foot rails, and three 8-foot panels. For the pour, just slide up the top two panels and pour from the side. You can also vibrate from the side. When that section is full, simply, slide down the panels and do the next lift.” 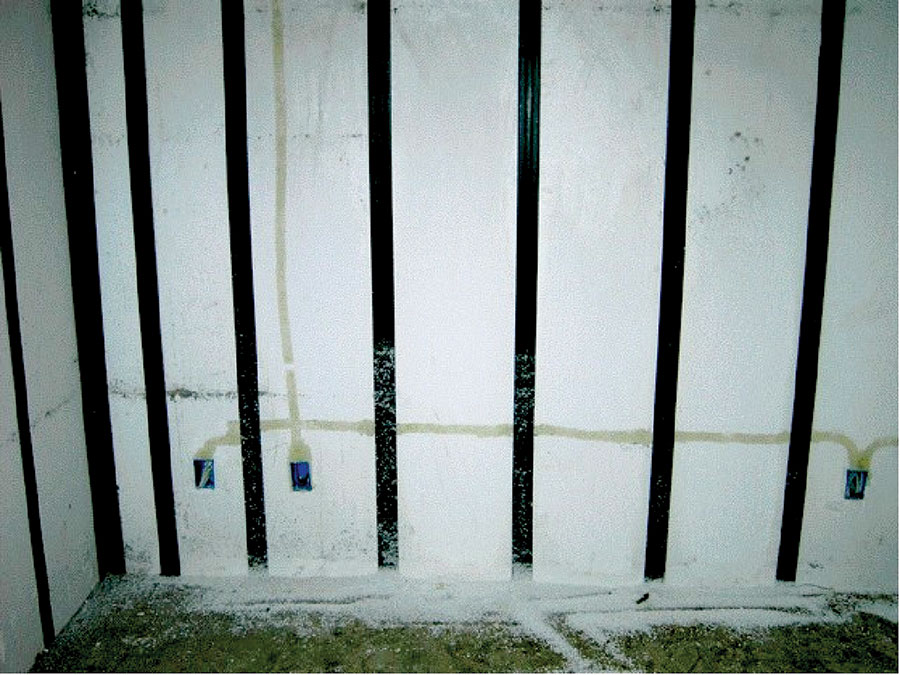 Full height furring strips have been carefully designed to minimize difficulties with wiring.

Despite the full-height furring strips, both Hobbs and Rudolph claim horizontal electrical runs are easy.  The Hobbs system has a built-in one-inch-diameter round electrical chase built into the furring assembly so cutting of the furring assembly is not necessary. TF System has a special cutting tool called a Rip-it that is used in conjunction with a Roto-Zip to cut through the plastic and foam quickly and easily. Chases can also be cut with a router or chainsaw instead of a hot knife. A final alternative is to use the pre-molded PVC electrical chases made by Solcraft. These allow easy modification to cable and wiring even after the wall is finished.

Hobbs and TF can be used to make radius walls, as well. Either system can be modified onsite to form the curve, or they can be custom ordered. Hobbs says most customers prefer the panels come pre-cut to fit the radius desired.

Currently, there are four vertical-oriented ICFs on the market. TF System and Hobbs have already been mentioned. ArmoPanel, made by Hi-Tech Building Systems of Toronto, Canada, is a preassembled block measuring four feet wide by eight feet high. It is still produced, but is outside the scope of this article. The fourth brand is HercuWall, a relatively new product that hit the market about a year ago. 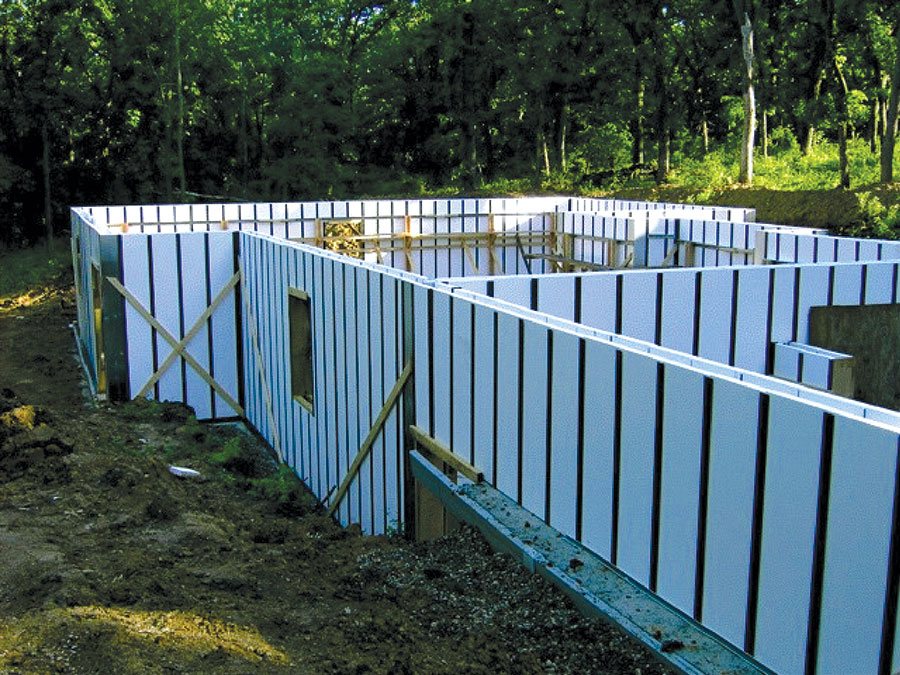 The first-time installer on this vertical ICF job in Van Meter, Iowa formed and poured the walls with 68 hours of labor, less than one-third the estimated time needed to stack and pour 2,600 sq. ft. of wall using a “block-style” ICF.

Like ArmoPanel, HercuWall is delivered to the jobsite in large, pre-panelized sections. Each panel is customized to the job, and can measure up to four feet wide and 12 feet tall with window bucks and rebar already in place. It utilizes a unique post-and-beam concrete design, with a tie beam at the bottom and a reinforced bond beam at the top of the wall. Interior concrete columns measure 5”x5” and are spaced 12” on center. In between columns is the EPS foam “tie.”

Because this system uses so much foam, it uses substantially less concrete than traditional flat wall systems—up to 125 sq. ft. of wall per cubic yard of concrete. The foam also increases insulation values (estimated at R-30), and reduces bracing requirements. It would not, however, provide the disaster resistance of a typical ICF, as there’s nothing but foam in between the concrete columns.

Because the system is panelized, homes go together fast. A four-person crew erected and poured the walls for a 2,000 sq. ft. single-story home in a day and a half.

Obviously, neither ArmoPanel nor HercuWall can be installed one side at a time, like TF can. Also, radius panels need to be special ordered, and cannot be made at the jobsite.

TF System is the original vertical ICF, and is still enjoys the largest share of the vertical ICF market. With TF, installers can choose between plastic (polypropylene) ties or galvanized steel. Installed every 8 inches on center, either tie can be used to create wall thicknesses from 4 to 24 inches in two-inch increments. The full-height furring strip is a generous two inches wide.

TF also offers a wide variety of foam choices. The system accommodates Expanded Polystrene (EPS) and Extruded Polystyrene (XPS) panels in thicknesses ranging between 2.5 and 4 inches on either or both sides of the wall. This system has a proven track record with projects of every size, even large industrial/commercial projects.

At any time prior to the pour, panels on either side can be raised to install rebar, retrieve objects, clean out debris, and allow inspections. It also facilitates side pours. The only horizontal system that offers this capability is IntegraSpec ICF.

Hobbs is installed similar to TF. While it only offers a single tie design (plastic) and foam type (EPS), it has a number of advantages over other systems. Perhaps the biggest advantage is the “modified flatwall” design of the concrete cavity. Andrew Hobbs explains, “The Hobbs system is engineered for every project and optimized to place concrete only where it is structurally required for strength, reducing the cost of concrete by 40% compared to a regular flatwall ICF.” Hobbs has 39% more foam than typical ICF blocks, which translates to 25% better insulation.

Perhaps Hobbs most audacious claim is that the system is “50% faster to assemble and requires 50% less labor than ICF blocks.” Joseph Farella, the company sales manager, conducted a time trial to verify the claim.  The video, which can be viewed via our website, pits a single Hobbs installer against an experienced two-man ICF crew. It ends in a tie, primarily because the two-man crew has to set up scaffolding and bracing to finish stacking the nine-foot four-inch walls. 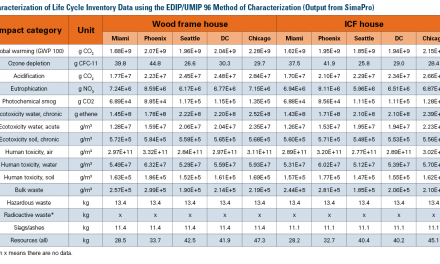 ICF’s And The Life-Cycle Assessment